Superman. Batman. Spider-Man. Wolverine. Spawn. These are some of the biggest names in comic books, and for a period in the 1990s, they were the stars of their very own trading card game. In OverPower, players could build a team of their favourite superheroes and supervillains, then unleash their special abilities and powers in an all-out slugfest. With gorgeous artwork and tons of cards to collect, OverPower was the TCG that brought comic book battles to life. At Zephyr Epic, we love trading card games both new and old, so today we’re going to turn back the clock and take a look at this near-forgotten gem that did its best to survive in the Wild West of the 90s trading card market.

OverPower was introduced by Fleer in 1995. After Magic: The Gathering arrived to dominate the hot trading card market of the early 1990s, trading card companies scrambled to turn various popular franchises into trading card games. Star Wars, The Lord of the Rings, James Bond, Star Trek, and X-Files are just some of the properties to hit the market with their own TCGs. But given that the early 90s also belonged to fever-pitch collecting of comic books, it’s no shocker that Marvel and DC wanted part of the action as well.

Fleer’s initial release was Marvel-based, featuring popular characters like Iron Man, Captain America, and the Fantastic Four. While Marvel would remain the main focus of the game throughout its run, Fleet did eventually release DC and Image sets to add characters like Green Lantern, the Joker, and Wynonna Earp to the mix. Ten sets were released in all before the game was finally discontinued in 1999.

First, a brief glossary of some of the different types of OverPower cards:

As you can see, there were a lot of different cards needed to build an OverPower deck! 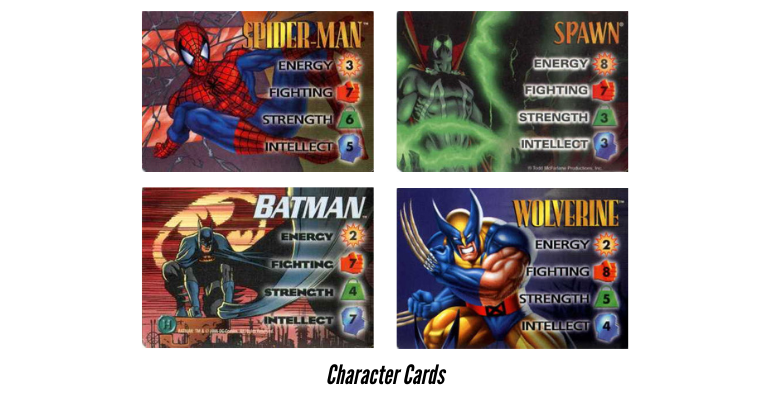 Here’s how the game worked: A player puts together a team of four characters by collecting their Character cards, which display each character’s stats and abilities. After drawing your cards and building your hand of seven cards, each player decides how many Mission cards they want to wager going into the round.

Once the Mission Cards are wagered, each player takes turns attacking the characters on the other player’s team. This is usually done with Power cards usable by the characters in play (determined by the stats on their Character cards), but these attacks could be beefed up with bonuses from Universe cards. Special cards, unique to each character, can be played to either initiate an attack or an action that breaks the normal rules. If possible, Power or Special cards are then used by the defending player to parry the attack.

The best aspect of the game was the fun in building a team of comic book characters, especially if you were a fan of Marvel Comics. With seven Marvel sets, there were a lot of characters to choose from, combining popular characters like Thor and Storm with cult favourites like Deadpool and Scarlet Witch. You could use villains too, putting heroes alongside their arch-enemies, like Daredevil and Kingpin or Mr. Fantastic and Doctor Doom.

Unique stats and Special cards worked well to draw from the different personalities and abilities of each character. For example, Wolverine has a Special card that allows him to remove previous damage, imitating his healing factor from the comics, whereas Cyclops has a card that adds a huge bonus to an Energy attack, imitating the moments in the comics where he lets loose the full force of his optic blast. Each Special card helped bring these unique characters to life.

Mission cards were based on popular storylines from the comic books, which framed the battle in a context of the comics. Not only were your characters engaged in a big super-powered fight, but depending on which Mission cards you chose, they were fighting to claim the Infinity Gauntlet or save the world from the Dark Phoenix. The biggest events in comic book history succeeded or failed depending on how well you played, so try not to let the pressure get to you!

While the game as a whole was a lot of fun, there were a few mechanics that probably made the game a little too complicated. Wagering Mission cards distracted from the fun of trying to eliminate your opponent and wagering a bunch of cards early on could end the game too quickly. There was also a “discard duplicates” mechanic that forced players to discard any duplicate cards from their hand. Given all the different types of cards needed to play the game, this made building decks even more of a headache if you didn’t want to risk running into that problem all the time and constantly having an under-powered hand.

In retrospect, the way Fleer released the series also could have used some re-tooling. The DC and Image sets were meant to be stand-alone and could not be played with the Marvel sets that were already released, which restricted the fun of combining your favourite characters. I mean, who doesn’t want to make a team of Wolverine, Batman, and Spawn? Another hiccup was the decision to hold back some Character cards for future sets, which meant that popular characters like Wonder Woman, the Flash, and Black Panther were missing from the initial releases, and major characters like Thanos, Loki, and Batgirl never ended up getting cards at all once the game was discontinued.

OverPower never rose to the heights of popularity that Magic: The Gathering, Pokémon, and Yu-Gi-Oh! currently occupy, so aside from a few promo cards, the card values remain relatively low. OverPower didn’t have variants like foil or hologram versions of cards, relying instead on the popularity of the characters included in each set to drive the sales. That said, cards from the last three sets to be released—Classic OverPower, Image OverPower, and X-Men OverPower—are more valuable, due to how few copies of these sets were printed. If you have any sealed booster boxes of those sets tucked away, you are sitting on a potential gold mine. 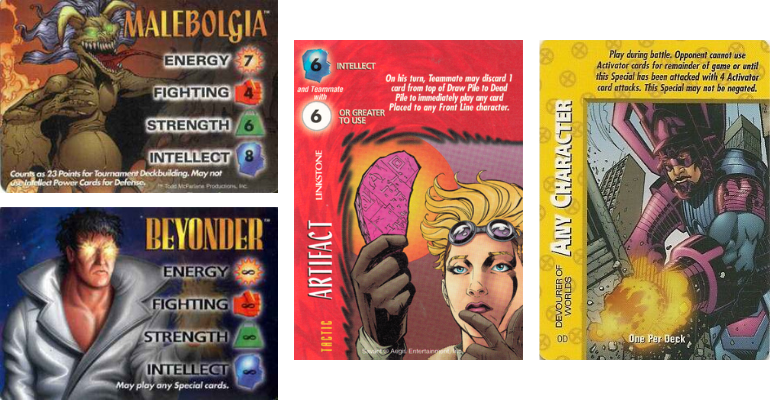 If you are one of the few out there who played OverPower and managed to keep your collection in good shape, there are a few higher-value cards to look out for. Due to the limited print-run of the set and the popularity of the characters, many of the Image cards are worth the most, including the Malebolgia Character card ($50 USD), the Power Blast Universe card ($30 USD), and the Linkstone Artifacts card ($40). For Marvel cards, the Character cards for big names like Spider-Man, Thor, and Iron Man can get you anywhere between $15 to $30. And as for the promo cards we mentioned? The Beyonder Character card is sold for as much as $60. The card with the biggest value, fittingly, belongs to the biggest guy of them all: the Galactus Any Character Special card can fetch $200!

The 90s were a wild time for trading cards, and with the emergence of Magic: The Gathering, the market was suddenly hooked on the idea of TCGs. OverPower was one of many that managed to catch the wave of interest, and while it didn’t last forever, it’s four-year ride was longer than most. OverPower was an exciting game that captured all the fun and insanity of big superhero battles and let you build the team-ups you always wanted to see in a game that was very fun to collect and play. And there are some fans who continue to play the game. That’s one of the advantages of the card values being relatively low. If your interest in the game is now piqued, it shouldn’t cost you too much to start building a deck of your own! For more info about the cards, the game, and future tournaments, check out OverPower.ca and OverPowerCards.com. 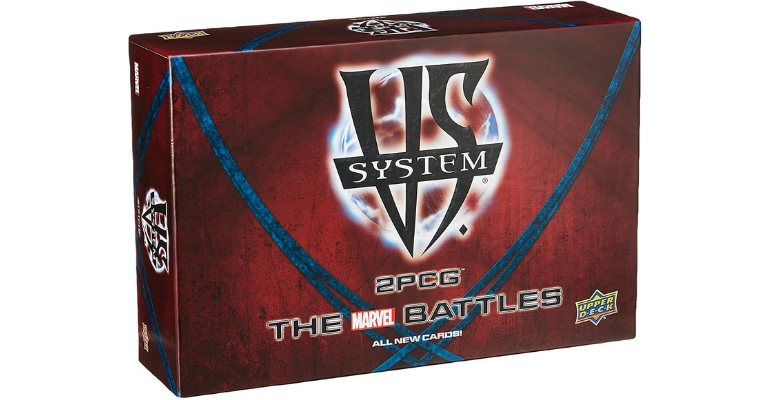 Since the discontinuation of OverPower, Marvel and DC have frequently tried other TCG concepts to get fans hooked, including the current Vs. System game developed by Upper Deck. Will the massive success of today’s superhero movies help Vs. System last longer than OverPower? Only time will tell!

Is there an old TCG you used to collect back in the day? Share your favourites with us in the comments, and as always, thanks for reading!