On Tuesday, September 22nd, Wizards of the Coast took to Twitter and provided the following ominous message:

We’re closely monitoring developments in Standard. In order to avoid disrupting this weekend’s tournaments, we intend to provide an update on the format early next week.

It is not hard to guess what WOTC is getting at: bans are coming to the Standard format and soon. This comes at no surprise to anyone that has been playing in the format since the Zendikar Rising set came into rotation this week. Now that players have gotten their hands on the new cards, some of the most powerful cards are already dominating the format.

For the last year it has become apparent that those in charge of creating and playtesting Magic: The Gathering cards have made it a priority to fix the colour green. Green in the past has often been considered a bit of a “timmy” colour in Magic: The Gathering. Loved by many for its big, beefy creatures, but it has often been considered one of the weaker colours to play.

This has drastically changed over the last number of sets, with numerous cards having to be banned within the simic colour pie (green & blue mana).

Let’s take a look at some of these insanely powerful cards that have recently been banned from this colour pairing: 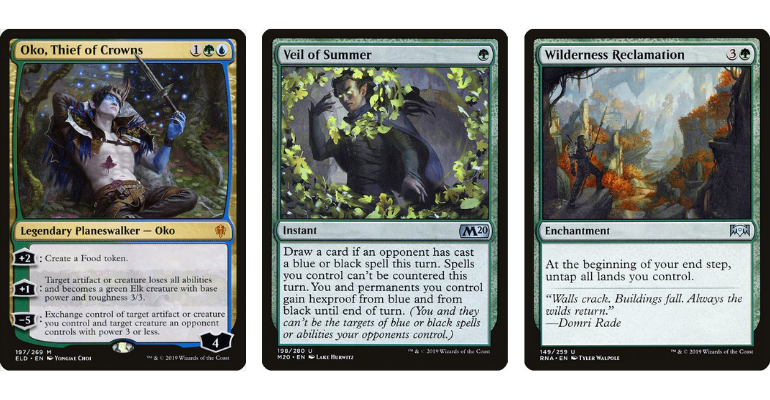 As can be seen above from the banned cards, green is no longer the format for beginners! In fact, now it is quite the opposite, as it has quickly risen in dominance to become the hardest colour to beat, especially when in the simic colour pairing.

What is truly incredible is the fact that even after all of these bans, simic is still the most powerful colour, due to the overwhelming amount of ramp cards this colour has in the format. Ramp allows you to “cheat” mana into play and thus play more powerful cards turns ahead of when they are typically allowed to be played. This means that green currently has the ability to snowball out of control and quickly overwhelm opposing colours with little to no drawback.

Next on the Chopping Block?

Many players are speculating on which cards Wizards of the Coast plans on banning, with the three cards being the most likely to go in the upcoming announcement: 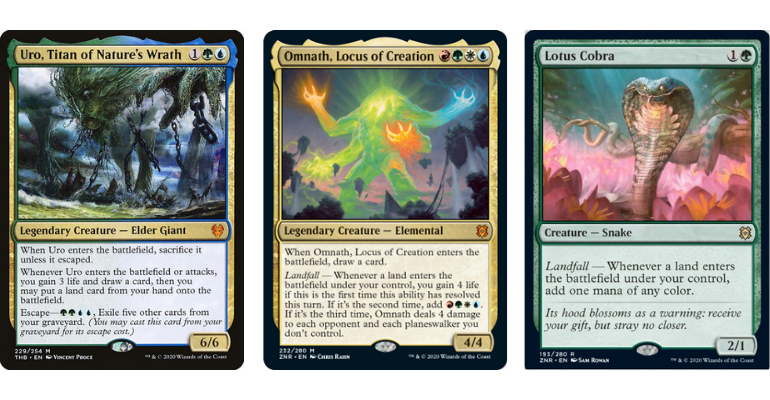 Although all three of these cards are currently problematic, it is “Uro, Titan of Nature’s Wrath” that has received the most complaints, due to it being a problem since it was released in the Theros: Beyond Death set. Uro has proven itself to be an incredibly versatile and powerful card, seeing play in every Magic: The Gathering format currently played. Not an easy feat!

There is also the reality that Wizards of the Coast is a business and they want to sell the latest, newest set. Banning newer cards could potentially hurt the sales of these new sets, making it very unlikely that either Omnath or Lotus Cobra will receive the ban hammer. Uro, on the other hand, is now from an older set, making it more vulnerable to be added to the long and seemingly ever-growing list of banned simic cards.

Although this is undoubtedly going to hurt the value of Uro, which now stands at an incredible $60 CAD per card (and is typically played in a playset of four), it is likely to remain a valuable card due to the fact that it will still be playable in many of the older, non rotating formats.

Two other cards that have the possibility of being banned in the near to medium term future are Embercleave and Winota, Joiner of Forces. Winotia, Joiner of Forces has already been banned in the Arena-only “Historic” format due to its power level, and in the Standard format, these two cards can completely overrun their opponents as quickly as Turn Four.

This is not common for the Standard format and is more akin to formats such as Modern, which has a way higher power level. Standard is meant to be the format of longer, balanced games, so many people suspect that both Winota, and Embercleave are possible future ban targets.

With the Standard format now rotating and a ban potentially in the works, we now find ourselves once again in a true brewers paradise, in which we are going to see many new and exciting decks coming forth.

We can’t wait to see what players come up with in the coming days, weeks and months, as these periods of time are some of the most exciting for those of us who love the game.

What do you think about the bans? Happy that WOTC is trying to fix the game, or upset that WOTC is taking away your favourite card? Let us know in the comments and, as always, thanks for reading!