Winter has arrived and Kaldheim is now upon us!

Kaldheim is the latest set for Magic: The Gathering, one that is sure to have many new cards that will be fun to add to your deck. This addition is expected to have a heavy focus on tribes and unique snow mechanics. Even existing archetypes in the Standard format, as well as older formats, should also receive new pieces to play with.

One particular fan favourite archetype is about to receive a much-needed boost in the form of a strong finisher card.

The kraken is about to be unleashed! 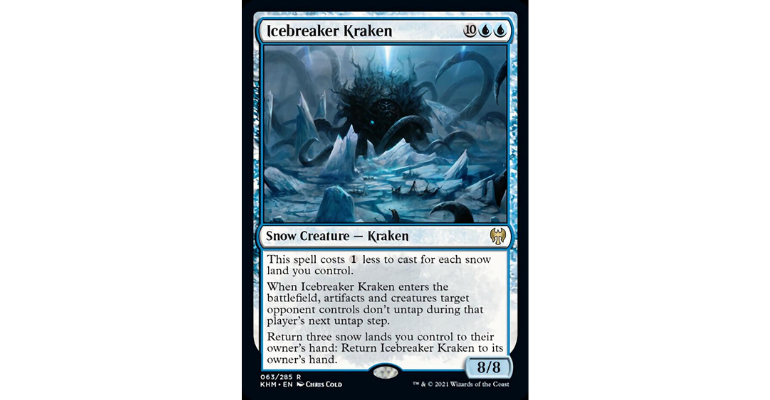 Many Mono-Blue Control players are giddy with anticipation over the prospect of using Kaldheim’s new Icebreaker Kraken and who can blame them? Who doesn’t want to play a giant Kraken that is nearly impossible to kill?

Looking at this card’s mana cost, you might be at first literally laughing out loud. A 12 mana costed card?! How could that possibly be playable? But read the first line of text before you start judging:

“This spell costs ‘1’ less to cast for each snow land you control.”

Well, it’s a good thing for kraken fans that snow lands are being re-released in Kaldheim! This ability makes the Icebreaker Kraken’s mana cost practically a non-factor, as Mono-Blue control mages can jam a ton of snow basic lands to reduce the card’s summoning cost.

The Icebreaker Kraken’s abilities don’t stop there. This giant beater of a beast comes with an amazing tempo play “enter the battlefield” effect, which prevents your opponent’s tapped artifacts and creatures from untapping in their next untap step. If you’re up against an aggro deck, this could be exactly what you need to stabilize the game and outdraw your opponent.

Finally, the Icebreaker Kraken comes with built-in protection/recursion capabilities, allowing you to return the card to your hand simply by returning three snow lands to your hand as well. Not a particularly high cost, so it should give you a lot of flexibility in a game.

To put it lightly, Icebreaker Kraken is a highly-playable, control shell finishing card that will allow you to decimate your opponents in the later rounds of the match. Do it right and there is very little they can do about it.

How To Use The Icebreaker Kraken

Icebreaker Kraken could easily be played in an Azorius (white/blue) or Dimir (black/blue) control shell, but the simplest way to use it is in a mono blue control.

That’s it! It really is that simple.

Now, you could play Icebreaker Kraken as early as Turn 6. But it’s probably best to wait until Turn 8 or even 10 before introducing your Icebreaker Kraken. Doing this will allow you keep a control spell in hand, thwarting your opponent’s attempts to kill the Icebreaker Kraken and allowing you to avoid using its return to hand ability, which will cost you in tempo.

Next, you need to be aware of what is in your local meta, or what you are seeing the most often during your online gameplay, then change and adjust the spells included in your deck to meet the control requirements of your opponent’s decks. 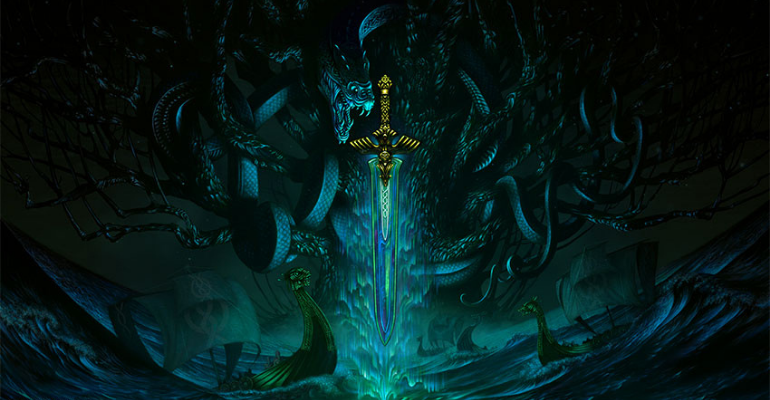 Kaldheim is finally here and we are so excited to start brewing brand new decks, testing them out, and finding out which ones have what it takes to hold their own against the existing archetypes that currently dominate the Standard format. We hope that all the Blue players out there (pesky as they may be) will be able to have the joy of landing their own monstrous Icebreaker Kraken on the battlefield! Is the card game-breaking? Probably not. But if you run a Mono-Blue Control deck, the Icebreaker Kraken has the potential to serve as an excellent finisher.

We’re clearly excited about the Icebreaker Kraken, but what other new Kaldheim cards are you looking forward to using? Make sure you don’t miss out and order your Kaldheim products today!