Kadabra, one of the original 150 Pokémon from the very first Pokémon games, has not had a new Pokémon card in over seventeen years. In fact, the last time that Kadabra appeared on a card was in the Skyridge set, which released in 2003. Now, at long last, it appears that Kadabra will be returning to the Pokémon TCG just in time for Pokémon’s much-anticipated 25th anniversary next year. 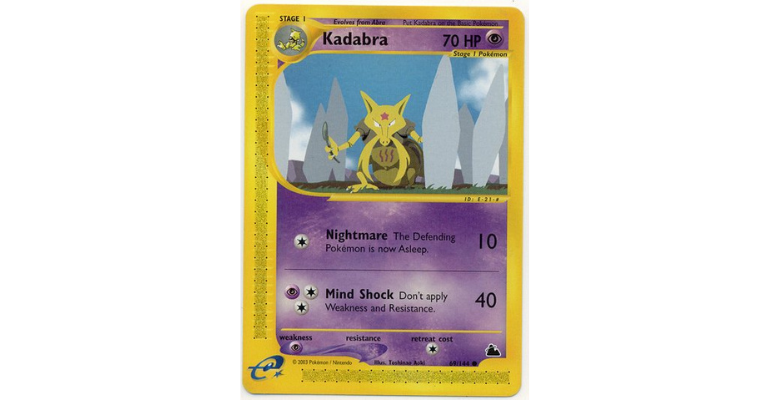 But why has the popular Pokémon been missing from the trading card game for so long? Well, it’s a bit of a complicated story involving a real-life magician who wasn’t as big a fan of Kadabra as the rest of us.

The Legal Battle Over Kadabra 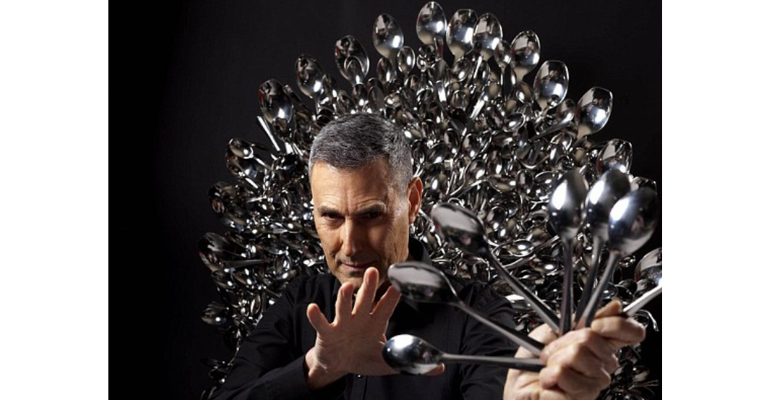 In 1999, Israeli-British illusionist Uri Geller accused Nintendo of basing Kadabra’s spoon bending trick on his act and Kadabra itself on him. Geller sued Nintendo for a staggering £60 million (roughly $100 million USD), and it has been such a headache for the company that they stopped producing new cards for Kadabra.

Here is an excerpt from the original 1999 Guardian article covering the story of Geller’s complaint:

“He claims that a Pokemon card he discovered while Christmas shopping in Tokyo is based on him. The “pocket monster” portrayed on the game card and collected avidly by children all over the world, carries two bent spoons in its hands, and is described on the card as a magician and “psychic”.

But the most telling similarity between the Japanese monster and the Israeli psychic is its name. While in the West the monster is called [Kadabra], in Japan its name is “Un-geller” and comes in two versions, Good Un-geller and Evil Un-geller.

Geller said he was never asked permission for the use of his name and image by Nintendo, whose computer game monsters have spawned a worldwide toy industry valued at £60bn.”

The article then continues with Geller himself stating:

“They can’t just make money out of my name and image and try to get away with it by changing the name of the card outside Japan,” Geller said yesterday. “I’ve already had several emails from people asking if it is really me on the card and saying how I must have been given a fortune by Nintendo for using my name.

I’m very angry about this. I wouldn’t have given permission for an aggressive and, in one case, evil character to be based on me. This is not even anything to do with the old question of whether I’m a magician or a real psychic. It’s a straight theft of my persona.”

After a long back-and-forth fight, on November 28th, 2020, Uri Geller announced on Twitter that he would no longer contest the appearance of Kadabra and offers his permission for Nintendo to continue using the Pokémon. After seventeen years, Geller is relenting to the constant barrage of messages, emails, and letters than he received from Pokémon fans over the years pleading for the return of Kadabra. 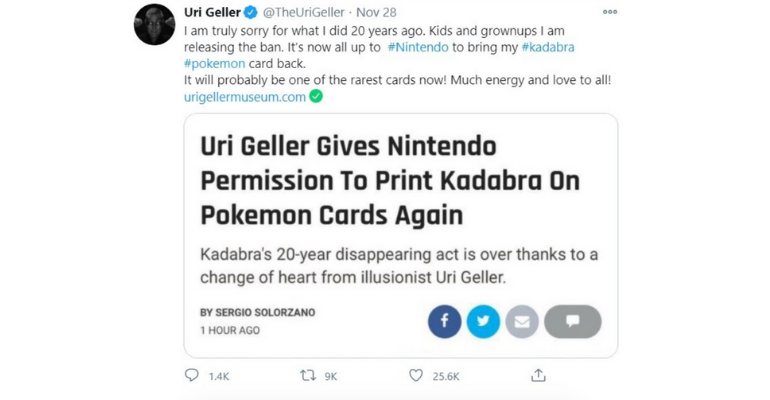 As can be seen from Geller’s twitter timeline, he’s waving the white flag.

I never realized how powerful and important it was for me to lift the ban on Yungeller/Kadabra, especially for all the kids around the world!

While Geller may very well have been right that Kadabra was a parody of his act, it’s nice to see his positive response to the outpouring of support that fans have sent his way since his change of heart.

All’s well that ends well and Kadabra can finally return to the Pokémon TCG. With Uri Geller’s complaint retracted, we doubt it will be long before Nintendo gives collectors what they want: new Kadabra cards to add to their collections! Now it’s time for fans to give Kadabra the welcome back it deserves.

How excited are you about Kadabra’s return to the Pokémon TCG? Let us know in the comments and, as always, thanks for reading!