It was a mixed summer for the Transformers franchise and its fans. First, there was some good news. Netflix debuted its new Transformers: War for Cybertron animated series in July with the promise of two more installments to follow, and exciting new Transformers toys continue to hit store shelves. Alas, there was some bad news as well. On July 20th, Hasbro announced that the Transformers TCG was cancelled due to lack of player growth combined with additional COVID-related hurdles. While it is always sad to see a card game cancelled, it’s important to remember the good things about this game. With beautiful cards and fun mechanics, Transformers is a TCG that should be looked back on fondly.

After the release of a popular Transformers-based Magic: The Gathering promo card at Hasbro’s HASCON convention in 2017, Hasbro launched the full-fledged Transformers TCG in Fall 2018. Featuring characters from the first Generation 1 cartoon that aired in the 1980s—including Optimus Prime, Megatron, Starscream, and Bumblebee—the game allowed players to pit Autobots against Decepticons in a battle featuring all kinds of special abilities inspired by the toys, shows, movies, and comic books. 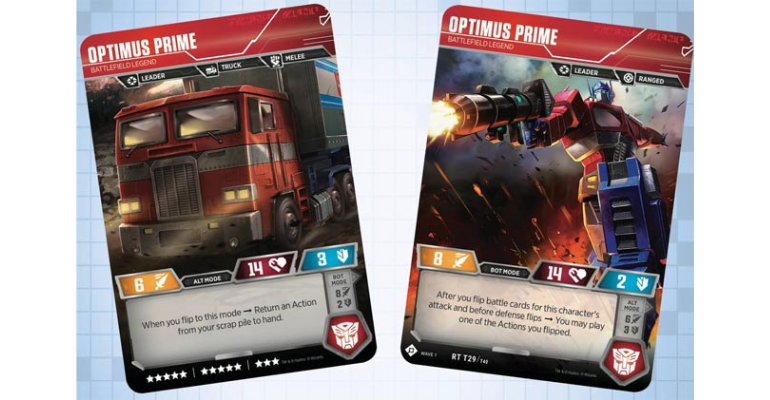 To play a game of Transformers, you and your opponent first choose from a wide roster of robots in disguise to build a team. Each character is worth a certain amount of points, and your team’s total points cannot exceed twenty-five. Most of the characters are featured on large character cards that are double-sided: one side features the character in their robot form; the other in their alternate “disguise” mode (i.e. car, plane, tank, cassette player, etc.). Each mode has its own base stat scores: attack, defense, and health. Along with those, some Transformers have special abilities that are activated when they are in one mode or another, so you get to decide which mode will work best with your battle strategy. This is made more complex with special characters who have unusual capabilities, such as Triple-Changers who can transform into three different modes and Combiners who can merge into one huge super-Transformer. 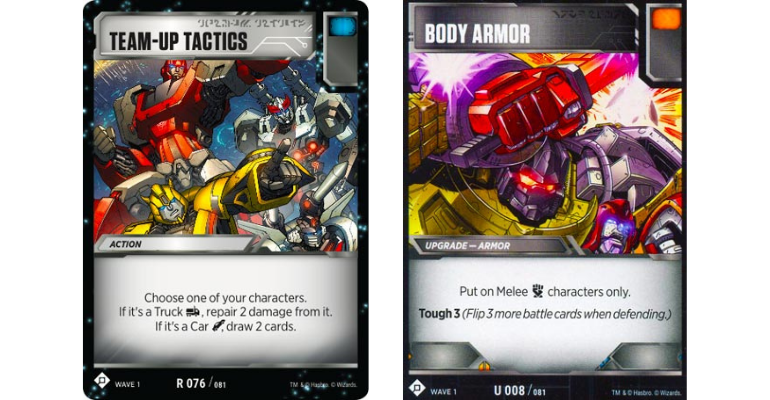 After your team is selected, you and your opponent take turns attacking one another until one team is defeated, which happens once every character’s health is lowered to zero. To do that, you’ll need to use the playing cards. There are two basic types of playing cards: Actions and Upgrades. Actions allow you to activate special conditions or effects during a round, while Upgrades can buff up your characters. Once you do that, you can choose to transform one character on your team, then finally use one character to attack a character on your opponent’s team.

This is when things get a little wacky. When a character attacks, its attack score is measured against its target’s defense score. To determine how much damage is dealt, the target’s defense score is subtracted from the attacker’s attack score, and the total remaining is taken from the target’s health. But there’s a twist. To potentially buff up your score, you also flip over two cards from your deck. If you’re attacking and the cards you flipped have orange icons in the top right-hand corner, they add +1 each to your attack score. Conversely, if you’re on defense, if the cards you flipped have blue icons, you get +1 each to your defensive score. Add in other kinds of events triggered by green, white, and black icons and suddenly the game becomes more complex. The player, when building their deck, needs to decide which playing cards to include when they not only act as Action or Upgrade cards, but can also buff attacks and defenses. The fun challenge is to properly weigh the costs and benefits of each card in both situations. It’s wonderfully fitting for a game based on a franchise that focuses on heroes and villains who can take multiple forms! 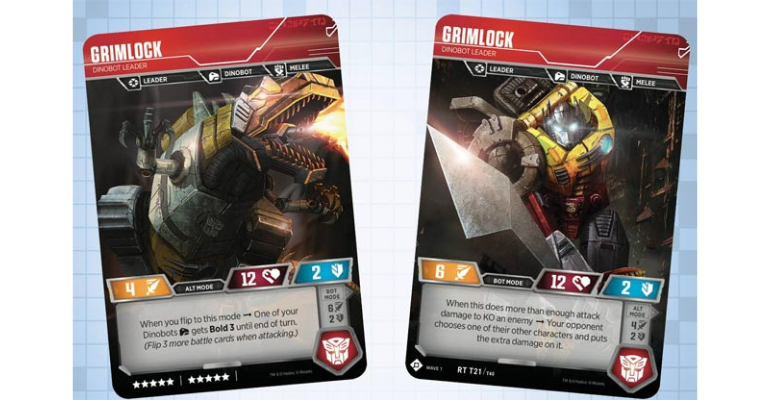 The game is fun, for one thing. It’s a huge nostalgia hit for Transformers fans, and having such a wide range of Transformers to choose from really draws out the feeling of picking your favourite characters to face off against your friend’s. The game not only features the mainstream favourites, but fan favourites from the 80s as well, like Soundwave, Jazz, Hot Rod, Grimlock, Arcee, and Shockwave. Waves 3 and 4 are even based on the franchise’s War for Cybertron event, which is also tied to the toys and the Netflix series. The game’s use of unique special effects and every character’s ability to transform captures the spirit of Transformers’ “robots in disguise” idea and brings it to life. There are a lot of different approaches to playing this game well, giving players plenty of opportunities to mix and match the different characters to find the right strategy! 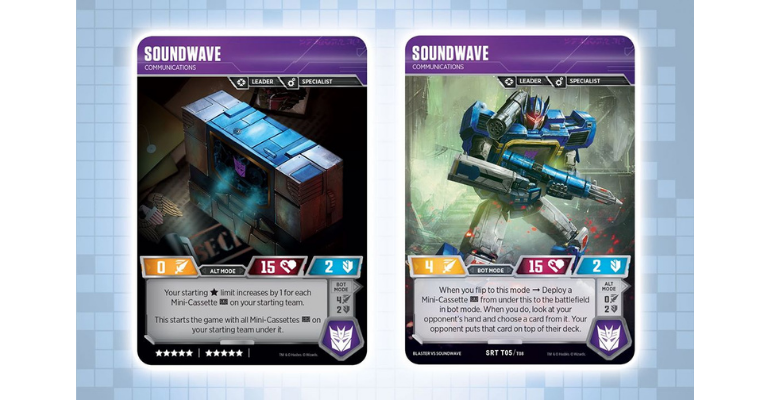 Hasbro not only created a fun game, but made it look good, too. The battle cards from the first two waves use art from the popular IDW Transformers comics, but Wave 3 onwards uses original art from IDW artists. The character cards are foil and look fantastic. Some reused art from toy packaging and the Transformers: Legends mobile game, but there are some characters with completely original art. And with multiple versions of certain Transformers to find, you not only get updated designs of their classic G1 designs, but some of their other designs as well.

What Didn’t Work As Much

So what were the missed Transformers TCG opportunities? For some players, the game was a little too unique, especially when it came to card sizes. The character cards in particular were troublesome, as the regular character card size was too large for normal playing sleeves. They were also two-sided, so you either needed to find clear sleeves that could fit or buy specialty toploaders normally used for large sports cards. Some of the specialty character cards, like the Triple Changers or Combiners, were cards that folded in half, and if you were planning on playing this game a lot, you can only wonder how long you can keep folding and unfolding the cards before they start to tear. 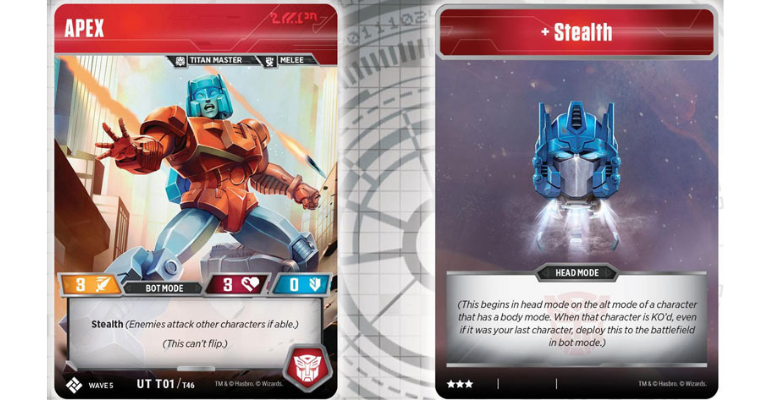 There were some questionable creative decisions as well, particularly when it came to what ended up as the final wave of cards: the Titan Masters set. Serving as Wave 5 of the Transformers TCG, Titan Masters was heavily based on the Headmasters line of Transformers toys introduced in 1987. The concept was that the Transformers had little buddies that could transform into robot heads and attach themselves to the bodies of the larger guys and give them upgraded powers. It was an admittedly weird gimmick that ended up signaling the beginning of the end of Transformers’ dominance over the 80s toy market. So it’s sadly fitting that the same gimmick that killed the initial popularity of Transformers toys is what also helped kill the TCG. If we had a say, we might have chosen instead to base Wave 5 on the popular Beast Wars toys and cartoon in an attempt to capture the attention of nostalgic 90s kids. Maybe it would’ve added some much needed additions to the TCG’s player base, but who knows? It’s always easy to second guess after the fact! 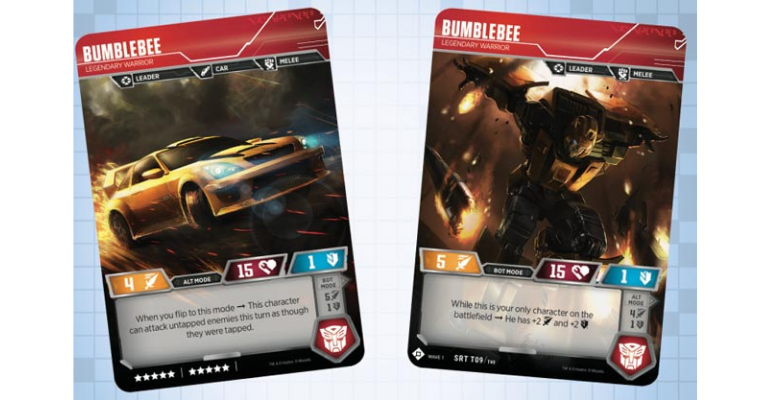 So what to do about Transformers TCG now? Well, there’s nothing stopping you from still playing! Nobody can take your cards away from you, so keep having fun with it. If you’re a collector, while it’s practically impossible to predict if a dead game’s cards will go up or down in value, given the high value Transformers collectibles tend to have, some Transformers TCG cards may retain or even gain some value now that the TCG is done. And if you’re just a Transformers fan looking for a fun way to bring your favourite characters to life, this is now your last chance to get your hands on some new Transformers cards before the secondary market becomes your only option.

For those of you interested in getting into the game, it’s better late than never! Zephyr Epic still has some Transformers starter sets, Wave 1 booster boxes, and War for Cybertron: Siege booster boxes. Get them now before they’re gone forever!

Rest in peace, Transformers TCG. ‘Til All are One!

What was your favourite part of the Transformers TCG? Let us know in the comments and, as always, thanks for reading!