Magic: The Gathering has been indulging in nostalgia for the past few months. First, they revisited the conflict between Mishra and Urza in the Brothers’ War expansion set released in November 2022, but now the game is ready for a throwback deep-dive in their upcoming special limited-run Dominaira Remastered set due on January 13, 2023. The set features reprints of popular and powerful cards from 27 previous Magic sets based in the plane of Dominaria.

To get you up to speed, here is a preview on what you can expect to find in this highly-anticipated release! 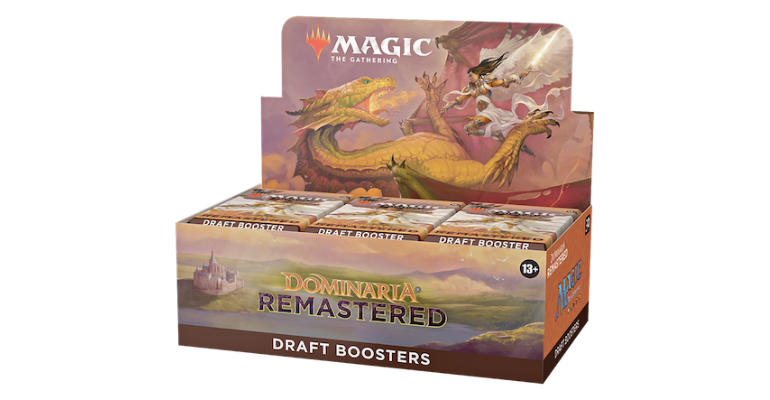 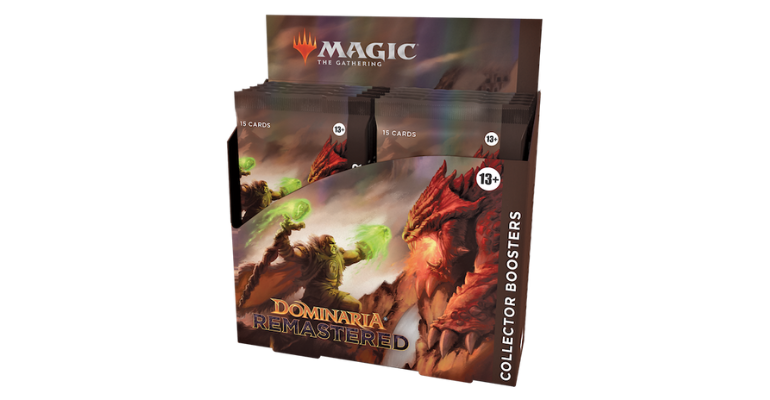 There are no new cards in Dominaria Remastered, but as mentioned before, the set is loaded with reprints from every previous set that took place on the plane of Dominaria. All 27 of them:

Cards to Look Out For

The breadth of this set’s release means that there are plenty of useful cards to be found. But there are definitely some in particular that will have Magic players hunting through packs in the hopes of adding them to their decks! Here are a few that you should keep your eyes open for: 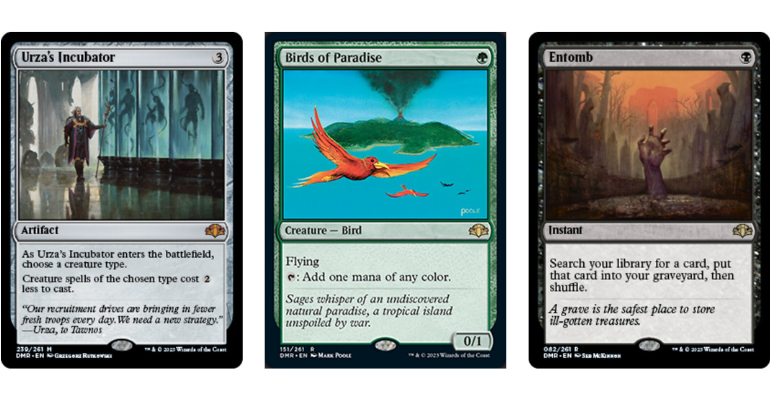 Urza’s Incubator costs three mana and is handy in a wide range of decks. It reduces the cost of creatures by 2, so long as they have the chosen type. In themed and tribal decks Urza’s Incubator is therefore invaluable, as it effectively reduces the cost of all your creatures. Subsequently, it’s a fan favorite in Commander, with players eager to pick up a copy of this powerful card.

Birds of Paradise is a useful creature for anyone using green mana in their decks, as tapping it provides you with one mana of any colour, making it one of the best mana dorks of all time.

If you need to get a card from your library to your graveyard fast, Entomb, which only costs one Black mana, is an inexpensive and quick way for you to get that needed card in the right place for summoning later on. 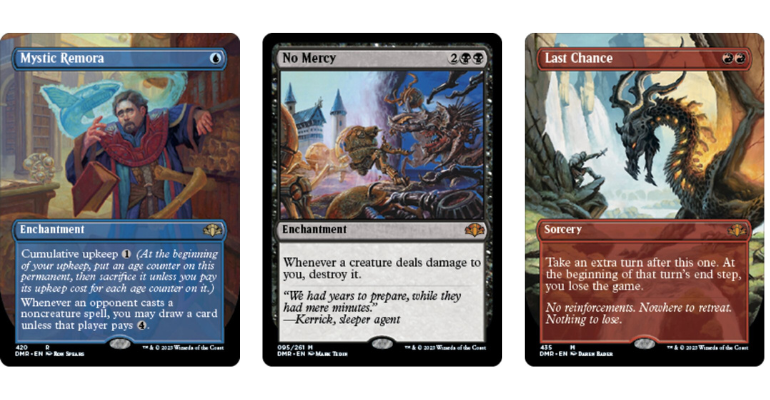 For those that like to mess with their opponents a bit, Mystic Remora allows you to draw a card every time your opponent casts a noncreature spell, unless they pay the tax of four additional mana.

And if you’re wanting to just be straight-up hostile, No Mercy is a spell that once played, destroys any creature that deals damage to you.

Finally, if the fate of the game is on a knife’s edge, but you know if you can win with just one more move, Last Chance allows you to take an extra turn, with the caveat that you automatically lose the game if you do not win before that extra turn’s end step. Nothing like going all in on one turn! 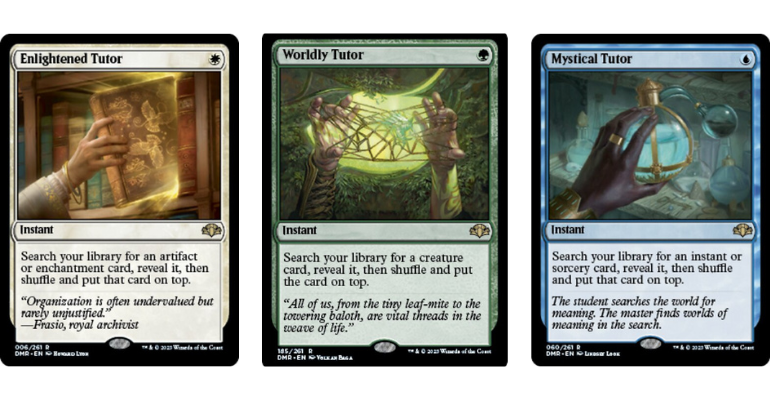 Commander fans can also look forward to a reprint cycle of Tutor cards, as Dominaria Remastered includes one Tutor card for each colour. These cards are powerful spells that allow players to search their library for a specific card, although each has its own requirements and limitations. 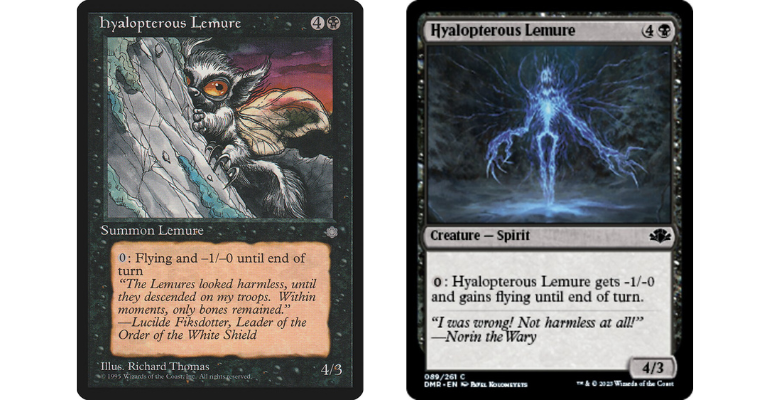 While not a particularly important card, Hyalopterous Lemure is worth a mention for being a correction to a longtime error (and subsequent in-joke) in Magic: The Gathering lore. In Magic’s 1995 expansion set Ice Age, the artist of the original Hyalopterous Lemure card misunderstood the meaning of the word “lemure” (which is a wandering spirit in Roman mythology) and thought it meant “lemur,” as in the monkey-like animals endemic to Madagascar. The reprint included in Dominaria Remastered, however, finally corrects the mistake by featuring new art of an actual lemure, so hopefully lemur fans won’t be too disappointed! 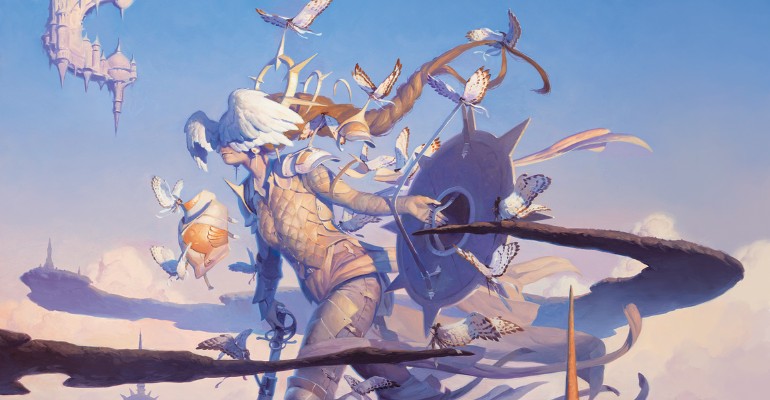 Longtime fans of Magic: The Gathering will find a lot to love in Dominaria Remastered, especially if they enjoy indulging in nostalgia. This set includes reprints of some cards going all the way back to the first years of the game. But newcomers will have plenty to enjoy too, as Dominaria Remastered gives them access to cards they never had a chance to collect the first time around.

Which card in Dominaria Remastered are you most excited to add to your deck? Let us know in the comments and, as always, thanks for reading!