Modern Horizon 2 spoilers are now in full swing with the set about to be released and in the players’ hands. Many have high hopes for this set, due to the popularity of the original Modern Horizons release. After getting a peek at it now, we can see that these hopes will not only be met, but exceeded!

Modern Horizons 2 has the potential to be one of the most impactful and valuable sets ever released in Magic: The Gathering’s history, and that is saying something.

Many archetypes are receiving some much needed upgrades, either through the creation of all new cards or via reprints that weren’t previously legal in the Modern format.

One tribe that will be getting some much-needed attention is the Merfolk. The Merfolk are one of the most popular tribes in Magic, but have been somewhat neglected for the past few years. Fortunately, that is about to change, as the Merfolk tribe will be receiving some truly stunning new cards in Modern Horizons 2.

One card in Modern Horizons 2 won’t just power up the Merfolk Tribe, but other blue-based decks throughout the format. 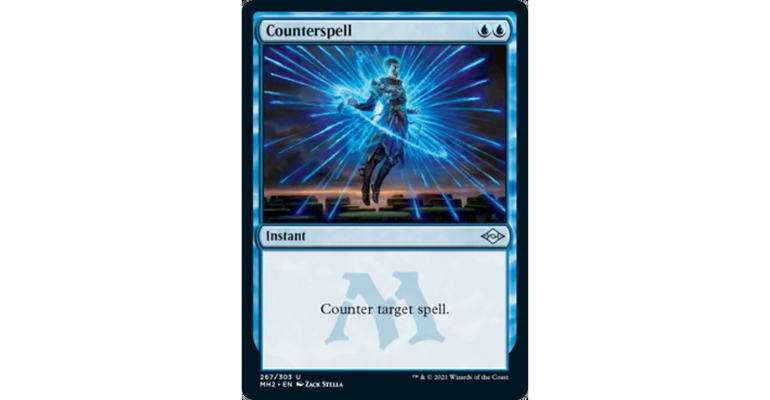 Counterspell is the undisputed king of counter cards. All other versions of this style of card are based on this first iteration, which draws its origin all the way back to the creation of the game itself.

Players have long been requesting for Wizards of the Coast to add to the Modern format, and with the release of Modern Horizons 2, it is finally going to be joining the card pool. It should act as a useful upgrade for decks that run counterspell-type cards without risking the chance of breaking the game.

Modern Merfolk fans are definitely going to love having an unconditional counterspell in their arsenal and will gladly embrace this card entering into the format. 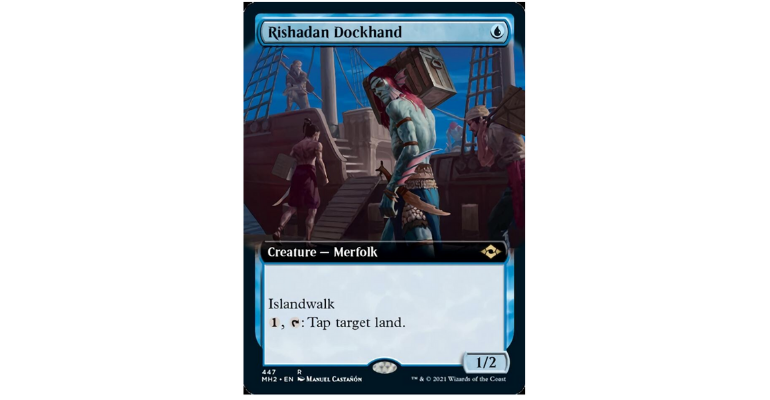 An instant must-have for Merfolk players will be Rishadan Dockhand. The weakest point of any Merfolk deck in Modern has been its one-drop slot, which has rapidly become outpaced by more powerful cards in other archetypes as the years have gone on.

Merfolk pilots have been begging for a better one-drop, and Rishadan Dockhand is an answer for their prayers. Although the card isn’t quite powerful enough to be considered a slam dunk, it is definitely an upgrade from what was available. 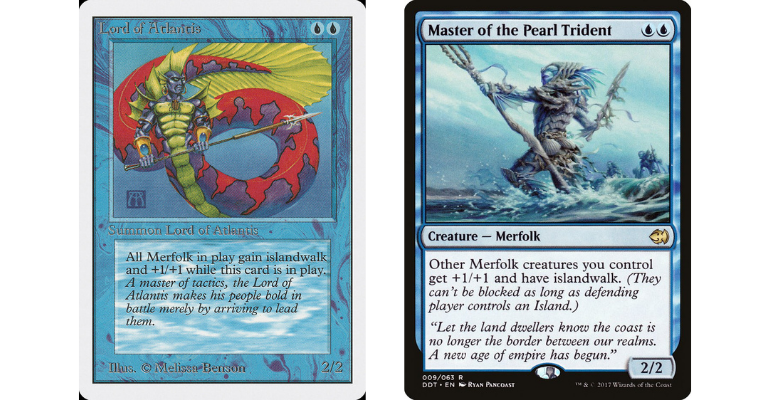 First of all, Rishadan Dockhand has Islandwalk itself, which means players won’t need to rely on the deck’s “lords,” like Lord of Atlantis or Master of the Pearl Trident, to give it that ability.

Second, this card’s baseline stats are 1/2, whereas the other Merfolk one-drops are exclusively 1/1’s, making them much more susceptible to a wider array of removal in the format, such as Laval Darts and Plague Engineers.

Third and definitely not least is its pay one mana, tap ability, which allows you to tap down one of your opponent’s lands. 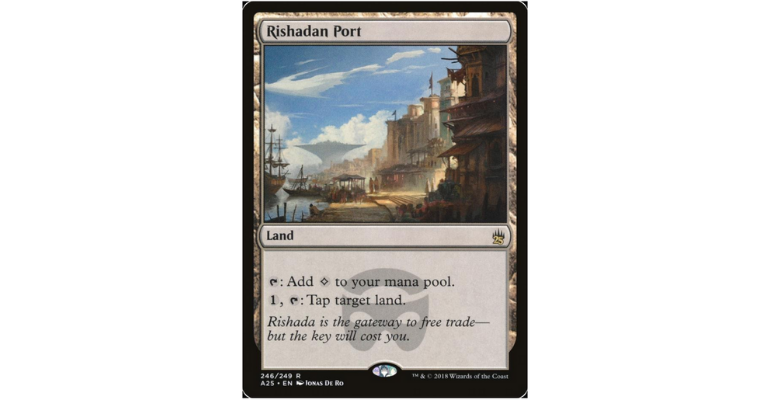 Rishadan Dockhand is essentially Rishadan Port but as a creature, not a land. Rishadan Port is not currently legal in Modern, but is a staple in the Legacy format due to its usefulness. The ability to deny your opponents mana on their “Upkeep” should never be overlooked, as tapping down the correct land in a multi-colored deck can completely lock your opponents out of the game. 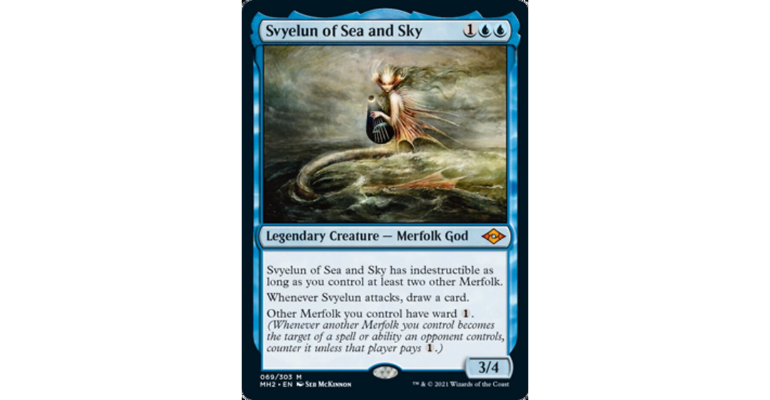 Finally, we come to the best of the best for the Merfolk tribe included in Modern Horizons 2: Svyelun of Sea and Sky, the mighty new Merfolk god!

Svyelun of Sea and Sky has the potential to become a three of or possibly even a four of in future builds of Merfolk decks.

For starters, this is a three drop Merfolk that has a statline of 3/4. That’s incredibly beefy when compared to other Merfolk cards. This means that Svyelun can avoid the vast majority of all removals in the Modern format, including Fatal Push, Bonecrusher Giant, Lighting Bolt, and Anger of the Gods.

Additionally Svyelun is indestructible if you control two other Merfolk, which is very possible on turn three when this card is expected to come into play.

Svyelun also has a lord effect, which gives all of your other Merfolk creatures “ward 1.” This is a great taxing ability that can foil many of your opponent’s plans, as it puts them in the position of not having enough mana to deal with all of your creatures.

Finally, Svyelun of Sea and Sky has the ability to draw cards each and every time that you attack. And if Svyelun’s indestructible ability has been activated or islandwalk has been used by Svyelun, you are likely to be attacking on every turn!

All these abilities add up to make Svyelun of Sea and Sky a monstrous value engine that can rapidly out-grind your opponents in an attrition-based match. It may just be one of the most powerful Merfolk cards printed in the last decade! 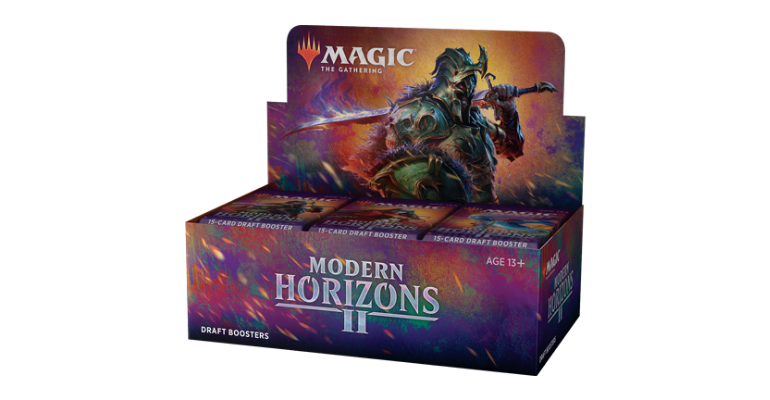 Merfolk players are finally getting the much-needed attention they deserve in Modern Horizons 2, but will it be enough to push merfolk into the top tier? We are eagerly anticipating the release the Modern Horizons 2 to find out!

Be sure to comment below and let us know what new Merfolk card you’re most excited about. Thanks for reading!