SP Authentic is one of Upper Deck’s most popular sets of hockey cards, and the 2019-20 edition is certain to continue the trend. Full of autographs, special inserts, and update cards, this set is loaded with value and sure to be a big addition to your collection! 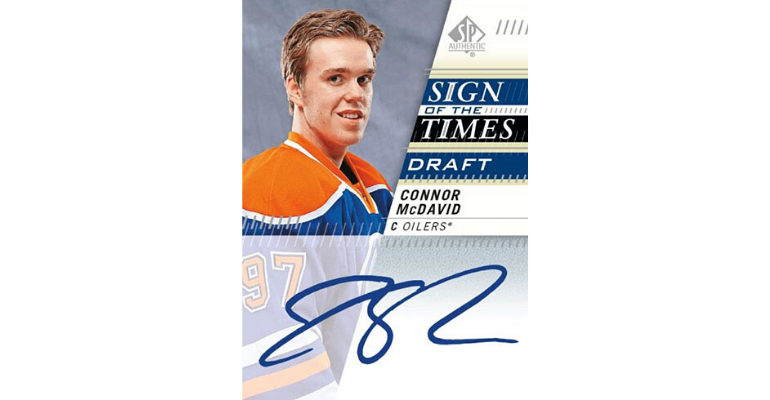 Sign of the Times is another classic SP Authentic subset and one that is actually split into several different subsets. The first is Sign of the Times Draft which features photos taken of players on their draft day. It’s a 25-card checklist and hits at one every 540 packs.

Rookie Sign of the Times are numbered out of 99.

There are several autograph insert subsets to be found in 2019-20 SP Authentic. Each Immortal Ink card is numbered out of ten and sports the signature of one of fifteen hockey Hall of Famers.

Marks of Distinction is another autograph subset and is numbered out of twenty-five.

Future Icons is a new addition to SP Authentic this year. All thirty-one NHL teams have a card and each card features two young superstars from a specific team. Each card is numbered out of 199.

Authentic Moments inserts highlight the big NHL moments from the past season. Autograph parallels can be found on average one in every 1200 packs. 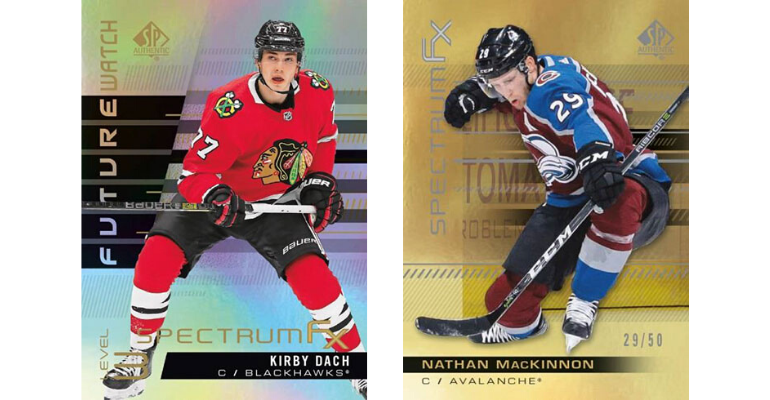 Spectrum FX insert cards are used for Upper Deck’s Bounty Program. It has a 99-card checklist, and card #100 is the bounty reward for collecting the first 99. In addition, the first fifty collectors to cash in on the bounty will also win a full set of Gold parallels of Spectrum FX. Spectrum FX cards feature both veteran players (1:18) and rookies (Tier 1 – 1:36; Tier 2 – 1:90; Tier 3 – 1:360). 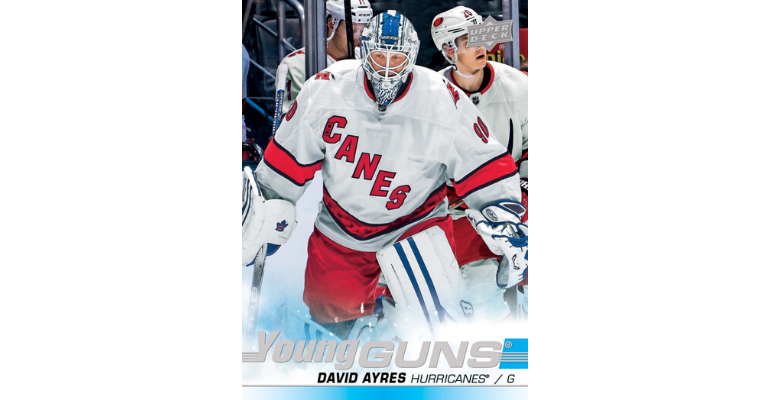 2019-20 SP Authentic includes the final updates to Upper Deck Hockey. Base update cards can be found one per eight packs, while All-Star Highlights are one per thirteen and Young Guns are one per fifteen. Just as in Series 1 and Series 2, there are UD Exclusives (/100) and High Gloss (/10) parallels to find. 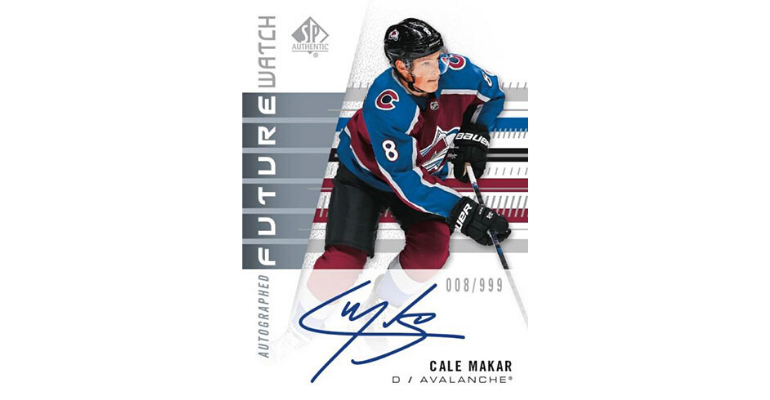 2019-20 SP Authentic releases at the end of May. There are five cards per pack, eighteen packs per hobby box, and sixteen boxes in a case. A 2019-20 SP Authentic Hobby Box on average contains: one Future Watch Autograph; one additional autograph; five 2019-20 Upper Deck Updates; one Spectrum FX; six Authentic Moments, Authentic Winners, and/or SP Essentials; and three Red Parallels.

Whether you’re trying to find Future Watch Autos, grab some old-school Sign of the Times, or finish your Upper Deck Hockey collection, 2019-20 SP Authentic is worth the wait. This is always one of our big sellers, so if you want a box of your own, be sure to make your pre-order today.

Angling for a Cale Makar Future Watch Auto or do you have your fingers crossed for the David Ayres Young Guns? Let us know which 2019-20 SP Authentic cards you’re on the hunt for in the comments, and as always, thanks for reading!