For years, Magic: The Gathering Core Sets were considered weak entry-level products for those who were just learning how to play the game. Well, no longer! 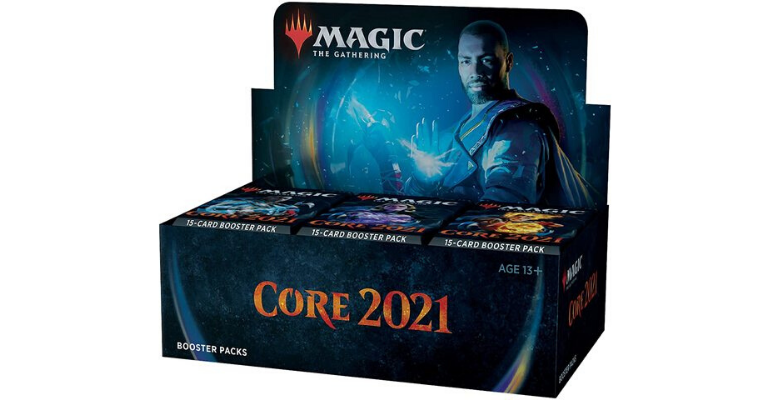 Core Set 2021 releases on July 3rd and Wizards of the Coast have delivered not only a good product, but one of the strongest Core Sets to ever be released. The set contains a plethora of powerful, much-desired reprints, as well as a number of brand new cards that will shake up not only the Standard format, but Pioneer and those beyond it as well.

What makes this year’s Core Set so powerful? Let’s take a look at the five most impactful cards making their debut. 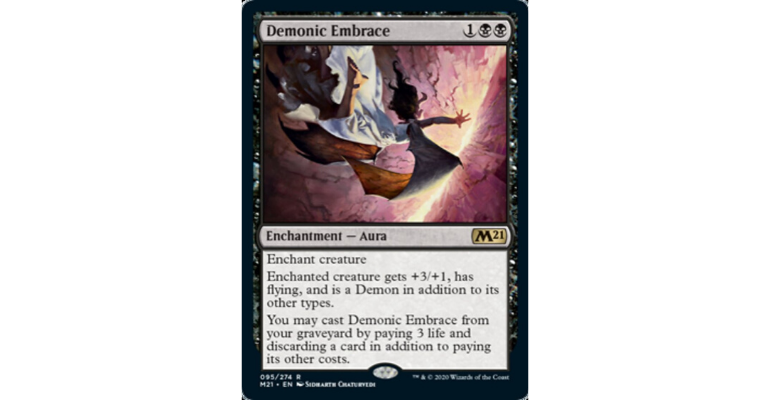 The first card to make our top five Core Set 2021 most powerful Standard format cards is one that many people are overlooking. Demonic Embrace is a two black, one colourless Enchantment – Aura card.

This card is often overlooked because it is an Aura, which is a type of card that typically needs to be attached to a creature before it does anything. The problem with Aura type cards is that you often leave the creature that you are attempting to attach your Aura to as a likely removal target, resulting in you getting “two for one’d.” That means your opponent only has to spend one card while you lose two.

Demonic Embrace, however, is no normal Aura card. It has the built-in ability to “recur” itself from the graveyard due to its ability to be played from your graveyard over and over again by paying 3 life and discarding a card from your hand.

This card will fit in perfectly in a Black aggro creature-based deck geared towards putting opponents on a short clock. 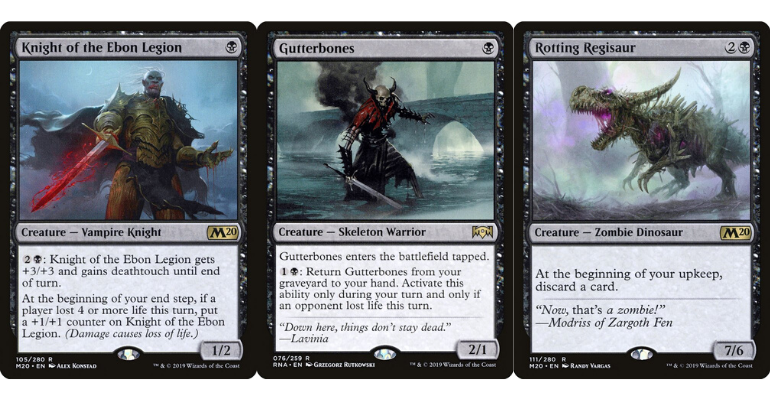 Black decks already have Knight of the Ebon Legion and Gutterbones, two of the best one-drop creatures in the format. Adding in Demonic Embrace makes a Black deck even more lethal.

In addition to this, Demonic Embrace works perfectly with Rotting Regisaur’s discard ability, allowing you to play it on turn four, swinging in for a possibly lethal strike.

Demonic Embrace is a strong card that is surely to find its way into a fast black aggro based deck. Don’t overlook it and don’t underestimate its power. 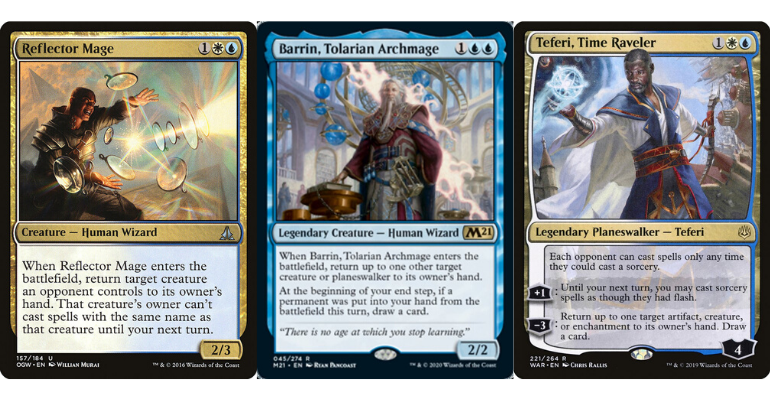 Reflector Mage and Teferi, Time Raveler are cards that set your opponent back while rewarding you for casting it. The fourth most powerful card on our Top-Five Core Set 2021 Standard list is exactly this type of card.

Barrin, Tolarian Archmage is a two blue, one colourless mana Legendary Human Wizard creature that upon entering the battlefield returns up to one other target creature or Planeswalker to its owner’s hand. The craziest part of this card is that if the permanent returned was owned by you, then you get to draw an extra card.

This has a wide range of possibilities that can net you a tremendous amount of value, considering the fact that there are a large number of creatures with beneficial “enter the battlefield effects,” as well as many Planeswalkers that can “tick” down their loyalty and be put back into your hand to be used again. This nets you tremendous card advantage and value in the process.

Barrin, Tolarian Archmage is a tempo-generating machine that is going to be heavily played and sought after in a number of formats, so don’t sleep on this one! 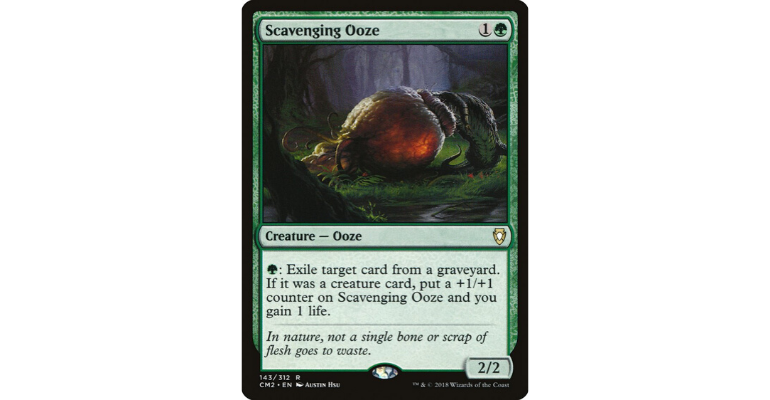 Next on our list is Scavenging Ooze, a card that needs no introduction due to the fact that it is a card that was, is, and possibly always will be powerful and played across just about every format in Magic: The Gathering. It is useful in the Modern, Legacy, Pioneer, Commander, and soon to be Standard formats, due to the fact that it is an impactful threat that serves multiple purposes.

When played, it is a fair value 2/2. But it does not stay this way for long, as it continues to consume cards from either player’s graveyard. This ability is great at targeting cards that can recur from an opponent’s graveyard, such as the Demonic Embrace mentioned above, as well as the highly impactful “god cards” included in the Theros: Beyond Death set.

Additionally, Scavenging Ooze is a serious threat that can shut down opposing aggro decks by gaining you life while also acting as a potentially huge blocker.

Expect to see Scavenging Ooze get serious play in the future, as it will be a vital card to include in many green-based sideboards in the upcoming Core Set 2021 Standard format.

Teferi, Master of Time: The Second Most Powerful Card 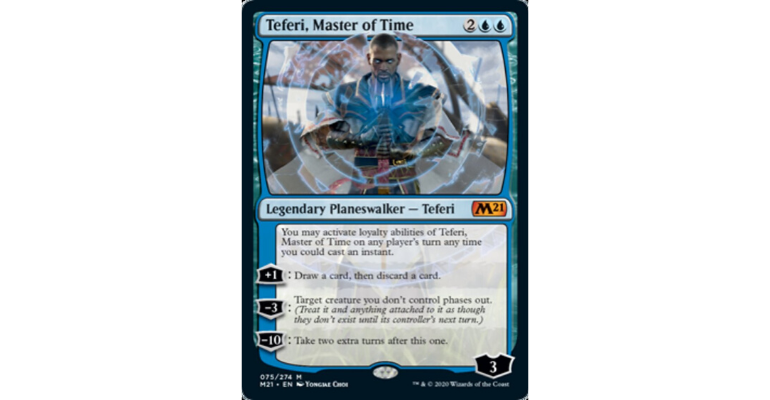 Whenever a Teferi card is printed, Magic: The Gathering players around the world feel a tingling sensation run down their backs, unable to quite pinpoint where the sensation is coming from.

Unless of course you are a blue control player, then you simply shout out with joy, knowing that you have just gained another powerful card.

Teferi, Master of Time, as has been the case with so many Teferi’s before it, will be one of the most powerful (and annoying) cards in the Standard format.

Its +1 ability allows its controller to draw a card, then discard a card, which is a nice digging ability but not that impactful. That is, until you read Teferi, Master of Time’s passive ability, which allows you to activate loyalty abilities of Teferi, Master of Time on any player’s turn, any time you could cast an instant.

This is huge, as it means that you can rapidly tick up Teferi’s loyalty counter with Teferi’s abilities on both your and your opponent’s turn. This works especially well with his second -3 ability which allows you to “phase out” either one of your creatures, protecting it / netting additional value, or to phase out an opponent’s creature, setting them significantly behind in Tempo.

Teferi, Master of Time’s final “ultimate” -10 ability allows you to take two extra turns after the one you are on, possibly giving you three turns to close out the game and dismantle your opponent.

This is a great Planeswalker that is sure to do Teferi fans proud.

Ugin, the Spirit Dragon: The Most Powerful Card 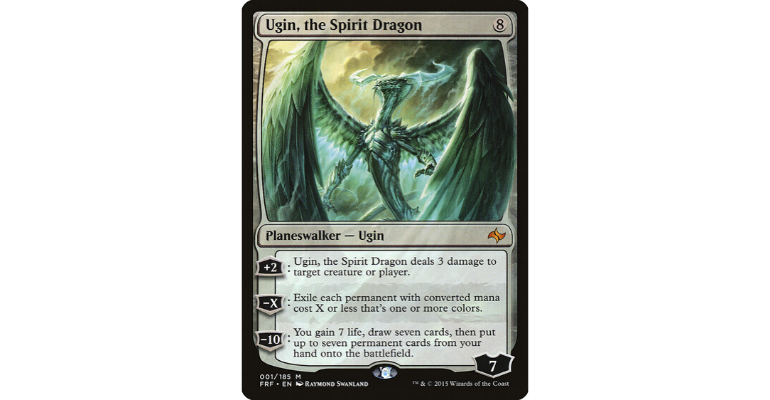 Last, but certainly not least on our top five most powerful Core Set 2021 Standard format cards is Ugin, the Spirit Dragon, a reprint that was originally seen in the Fate Reforged set.

Ugin, the Spirit Dragon was initially a powerful card that saw a significant amount of competitive play and for good reason. Once it hits the board, nothing before it mattered.

What this means is that you can wipe the board clean, clearing all of your opponents permanents off the battlefield.

This is usually devastating given the fact that Ugin, the Spirit Dragon typically sees play in the latter stages of the game, when your opponent is out of cards and has no way of dealing with it. In a matter of a few turns you are going to quickly run away with the match.

What makes Ugin, the Spirit Dragon especially powerful in this Standard format is the plethora of efficient mana-ramping cards currently available, such as Uro, Titan of Nature’s Wrath, Growth Spiral, Nissa, and Cultivate.

Ugin, the Spirit Dragon will be the most powerful “payoff” for any mana ramp based deck in the Core Set 2021 Standard based format and unless it gets banned, will see significant play until it eventually rotates out of the Standard format.

Dust off your old Ugin’s if you’ve got them, or act fast if you hope to acquire new ones from Core Set 2021, as this card won’t stay “cheap” for long!

So there you have it. Five of the most impactful cards to be found in the upcoming Core Set 2021 set. But there are many other amazing cards included in Core Set 2021 that are sure to shake up the Standard metagame, so be sure to pre-order today!

In the comment section below, we’d love to hear which cards you are most excited to see printed in Core Set 2021, of which you can find the full spoiler list here.

Until next time, thanks for reading!