For the first time in Magic: The Gathering’s history, a legendary card has been reprinted into a non core, standard legal set.

Thalia, Guardian of Thraben returns in Innistrad: Crimson Vow and we couldn’t be happier! The ramifications of this card being reprinted for the Standard format are going to be huge as Thalia prepares to shake up the game in a dramatic way. And not only is Thalia’s card important to the game, but her character also plays a key role in the Innistrad story, and in today’s post, we’ll dive deep into why this mighty warrior has had such a huge effect on both. 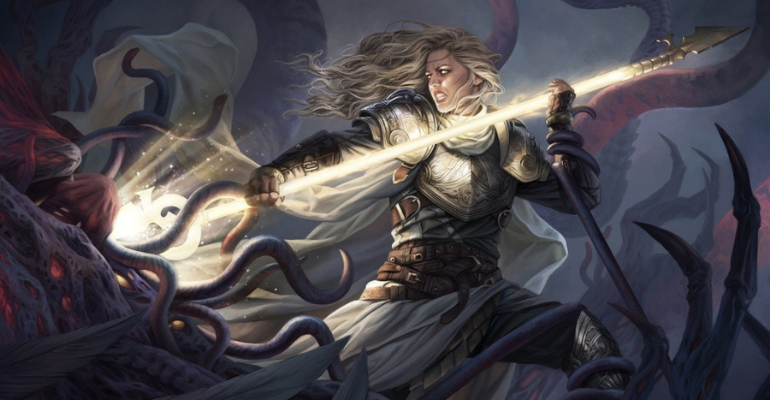 As a young inquisitor on the Plane of Innistrad, Thalia was one of the most promising Cathars to ever graduate from the academy at the Elgaud Grounds. The Cathars are the holy warriors of the Church of Avacyn, Innistrad’s main religion, and they are charged with protecting the humans of Innistrad from the countless horrors and threats that plague the land.

For a time, Thalia served as the right hand to the Guardian of Thraben, a man named Lothar. After Lothar’s death in the Siege of Thraben, Thalia was chosen to be his replacement and learned one of the church’s greatest secrets: Avacyn, a powerful Angel created by the vampire Planeswalker Sorin to maintain the balance between good and evil in Innistrad, was actually trapped inside the Helvault, the holy silver obelisk in the Cathedral courtyard. 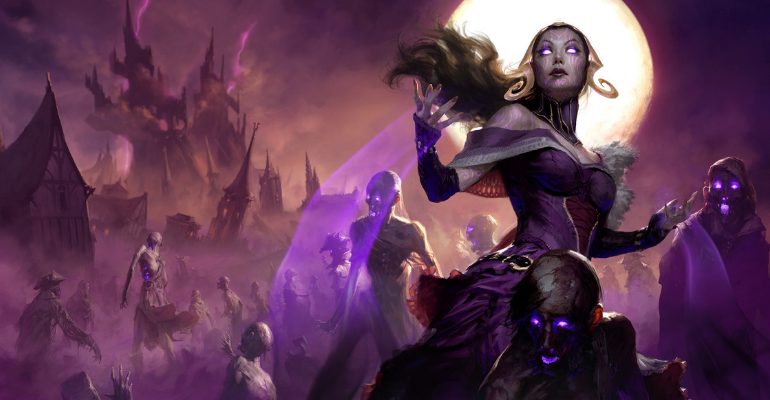 It would not be until the arrival of Liliana Vess, one of Magic’s most iconic Planeswalkers, that Thalia would free Avacyn, forced to do so when Liliana threatened to kill Thalia’s soldiers if she refused.

With the Helvault destroyed, Avacyn was restored and a great wash of white mana flooded Innistrad, leading to a rise in angels and heroes who could beat back the forces of darkness that were overtaking Innistrad. But the apparent victory was short lived, as Avacyn’s extended time within the Helvault had corrupted her mind. 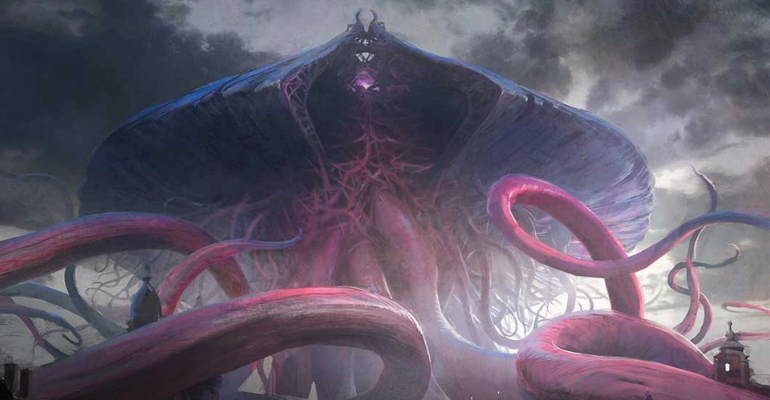 At the same time, the Church of Avacyn itself became corrupt, transforming into the same kind of evil Thalia swore to fight against. Leaving the church behind, Thalia created the Order of Saint Traft and would go on to not only destroy the corruption within the church, but also do battle against the encroaching threat of the Eldrazi Emrakul and its vile minions. Emrakul was almost successful in its attempt to destroy the entirety of Innistrad, but Thalia’s courage and the aid of the Gatewatch saved the plane.

Although Magic: The Gathering players love Thalia from a lore perspective, there is also a large number of players who adore her card for the power that it offers to one of the most beloved archetypes in the games history, Death and Taxes.

Death and Taxes decks are a staple in the Modern, Legacy, and Commander formats, and have a loyal and devoted fan base. Among the staples in this archetype is Thalia, Guardian of Thraben. As the name implies, the Death and Taxes archetype attempts to slow down (i.e. “tax”) your opponents while you build a lethal board state. This is typically done through the use of creature spells that can go on the offensive and kill your opponents while they are trying to catch up on resources. 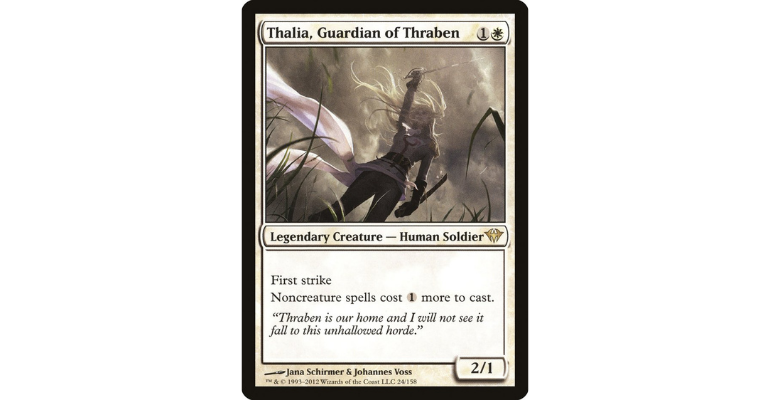 Thalia, Guardian of Thraben’s role is pivotal in setting up an overwhelming board state. Not only is she a good attacking / blocker with the first strike ability, but more importantly her passive ability of “noncreature spells cost (1) more to cast” is crucial in slowing down your opponents gameplan.

This means that combo players are playing one or two turns behind, depending on the number of spells they need to cast to enact their winning gameplan. Or in the more common scenario, it means that your opponent’s removal spells are taxed, thus protecting your board state for that much longer, allowing you to close out the game during this delay.

This gameplan gets even more punishing when you add other creatures and spells that have similar taxing effects, compounding your opponents woes and making their lives miserable in the process.

Thalia’s Return to Standard and Pioneer 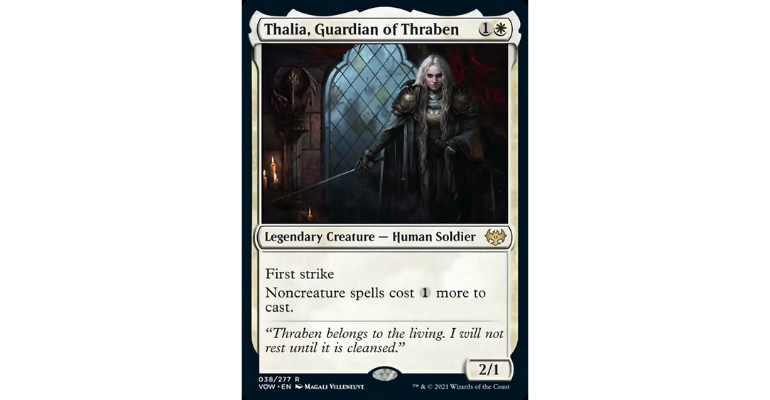 One major impact of the Thalia, Guardian of Thraben reprint is the fact that this card will now not only be legal in the Standard format, but also the Pioneer format. This is going to lead to a flood of new deck tech ideas and result in some very powerful brews thanks to the card’s taxing ability. Most notably will be what are humorously called the “White Weenie” builds, which are decks that play a ton of low-cost white creatures in the hope to “run” your opponent over before they have a chance to respond in a meaningful way.

In both the Pioneer and Standard format, Thalia, Guardian of Thraben is a monstrously impactful addition to these decks. Not only is she a good, low-cost attacker, but as was previously mentioned, she is going to slow down your opponent’s ability to use removal spells. This can be especially frustrating to your opponent if they’re trying to go for a board wipe, which is the usual counterattack to white weenie decks. But if Thalia, Guardian of Thraben is in play, the one turn that they need to stop your onslaught of white creatures is delayed, enough so that they might already be overrun by the time they can mount a defense. Thalia can seal your victory if played at just the right moment!

The reprinting of Thalia, Guardian of Thraben will not only make Magic: The Gathering history, but will also lead to the return of the popular Death and Taxes archetype that has been missing from both the Pioneer and Standard formats. Death and Taxes fans are obviously overjoyed and we are as well, as Thalia’s reintroduction should lead to some spicy brews!

Innistrad: Crimson Vow is now available for preorder in the following formats:

Are you looking forward to the return of Death and Taxes, or are you dreading the impending march of the white weenies? Let us know in the comments, and as always, thanks for reading!