We are all excited about the impending release of the latest Magic: The Gathering limited format, Ikoria: Lair of Behemoths, and all the many exciting and dynamic cards it will introduce.

This will be an immensely deep limited format, with an insanely high power levehttps://zephyrepic.com/shop/category/trading-card-games/magic-the-gathering/l of cards, both in the form of big creatures and great removal, making for some truly interesting gameplay experiences.

Today, we are going to explore one of the most popular archetypes that you can build around when playing in the Ikoria: Lair of Behemoth limited format, whether it be via Sealed or Draft: Azorius Flyers.

The Backbone of Azorius Flyers

A classic build around in just about any limited format is flyers, as they are evasive threats that are hard to deal with, especially when your opponent is lacking sufficient removal, as is often the case in the limited format.

In Ikoria: Lair of Behemoths, Azorious Flyers is a go-to choice, which consists of cards focused around the Blue and White mana colours. 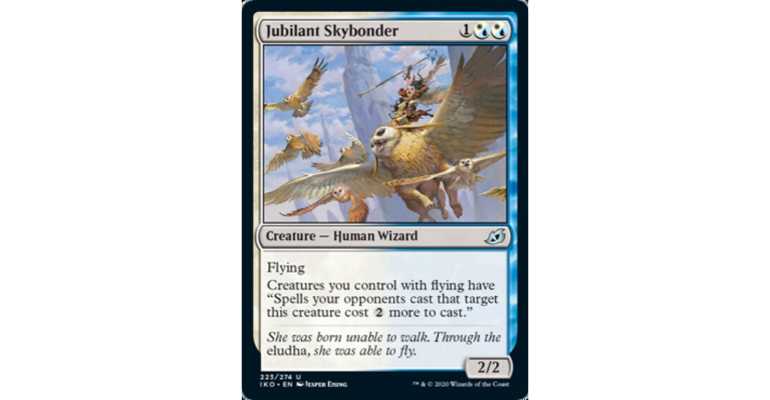 When building around this archetype, obviously you are going to be looking for any flyers you can find. However, there are a few notable standouts that can make this deck shine. First and foremost of these is Jubilant Skybonder, a 2/2 flyer for three mana, two of which can be paid with either of the Azorius colours.

This one card could mean a quick victory for you, as you fly high over their heads, striking their life total down to zero, before they have enough mana to even react. 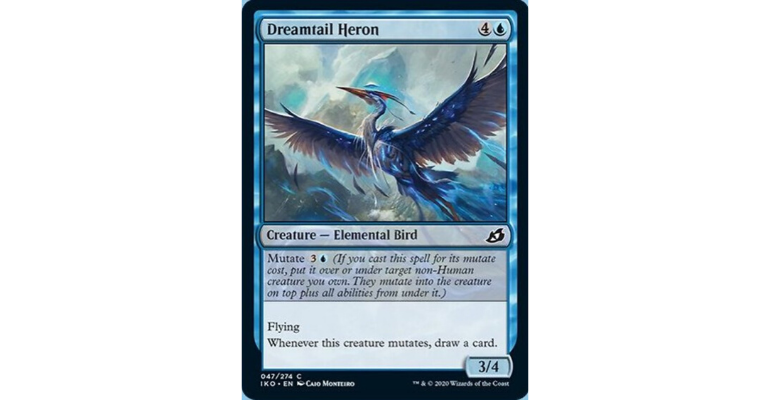 Another card to look out for in the Azorius Flyers archetype is Dreamtail Heron, which utilizes “Mutate,” one of Ikoria’s main new mechanics.

The “Mutate” mechanic allows you to cast Dreamtail Heron for four mana, instead of its original five mana, while also drawing you an extra card, meaning that Dreamtail Heron will replace itself right away while adding a strong presence on the board.

To “Mutate” a creature, you must cast this card on top, or underneath another pre existing non-human creature that is already on the board, possibly opening you up for a two for one scenario, which is risky, but often worth it in this limited format.

The great thing about Dreamtail Heron is that this card is only a common, meaning that you can often see numerous copies in a single draft, or sealed format. 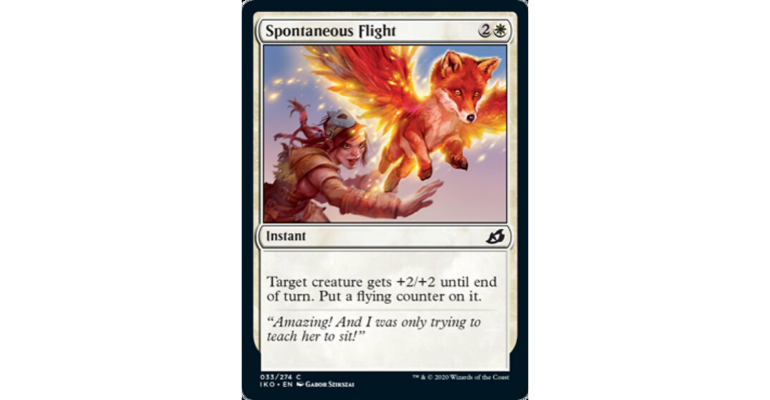 Another must-include in the Azorius Flyers archetype build is “Spontaneous Flight,” an amazing combat trick that can turn any creature that you would like into a flying creature, while at the same time often eliminating a creature that attempts to block you. This nets you positive value in the interaction and can pull you ahead in the game. 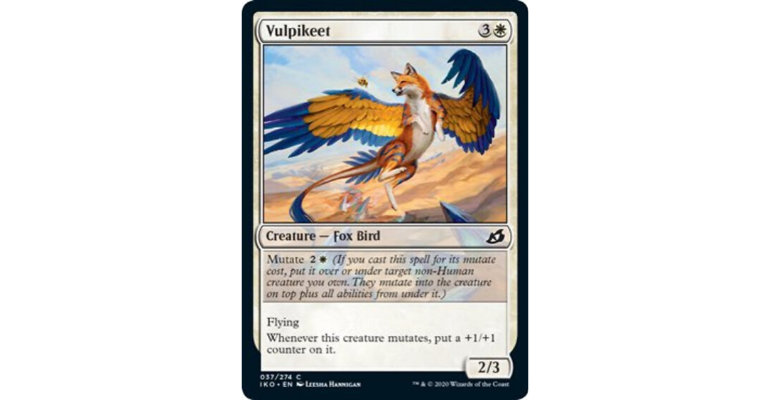 Vulpikeet, the flying fox bird is admittedly a wacky and weird card. It is also an incredibly powerful card, especially considering that it is in the common slot and thus easy to obtain multiple copies of.

This card will often be a 3/4 flyer, for three mana, which is well above the value curve and will be a hard card for your opponent to deal with.

It is a staple in the Azorius Flyers archetype and should be heavily sought after, as it is one of the best white commons in the Ikoria limited format. 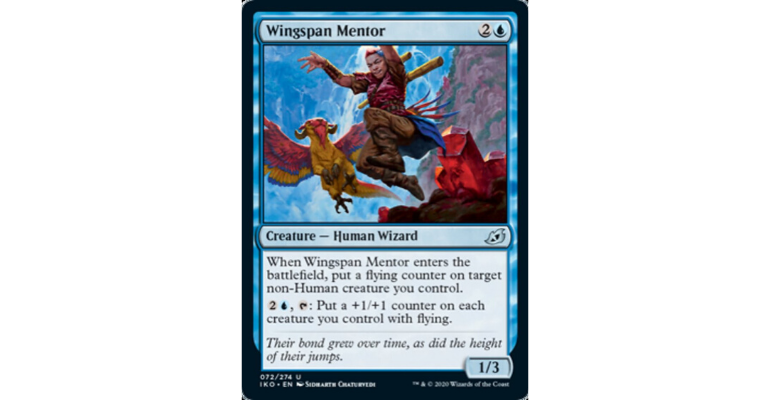 The last card of the Azorius Flyers archetype build that we are going to look at is Wingspan Mentor, and although it itself does not have flying, it has the ability to run out of control if left unchecked, as it can make another non-flying creature have flying by placing a counter on it when it enters the battlefield.

In addition to this, it is an amazing mana sink for your flying deck, as it can continuously add a +1/+1 counter to any creature with flying, each and every turn, resulting in some very beefy flyers if left to its own devices for too long.

Next we are going to take a look at two of the most powerful bombs that are available to the Azorius Flyers archetype in Ikoria: Lair of Behemoths. 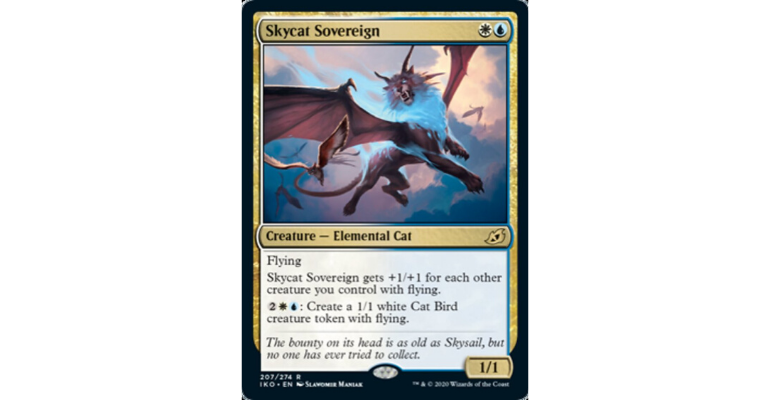 Skycat Sovereign is one of these cards and should automatically be chosen if you are trying to live the Azorius Flyers dream.

Although this creature looks small as a 1/1 flyer, its triggered and activated abilities guarantee that it will become a threat and will be a card that your opponents will need to get off the board asap, especially if it is mutated upon.

For each other flying creating that you control, Skycat Sovereign will get +1/+1, while also having the ability to pay four mana, to create an additional 1/1 Cat Bird creature token with flying, which will also increase Skycat Soverign’s +1/+1 passive ability.

When mutated upon, the creature on top will continue to receive the +1/+1 counters, adding to its base power and toughness, meaning that you could quickly have a flying fortress in no time.

It is a strong, powerful card and is one of the best additions to the Azorius Flyers archetype that you could hope for. 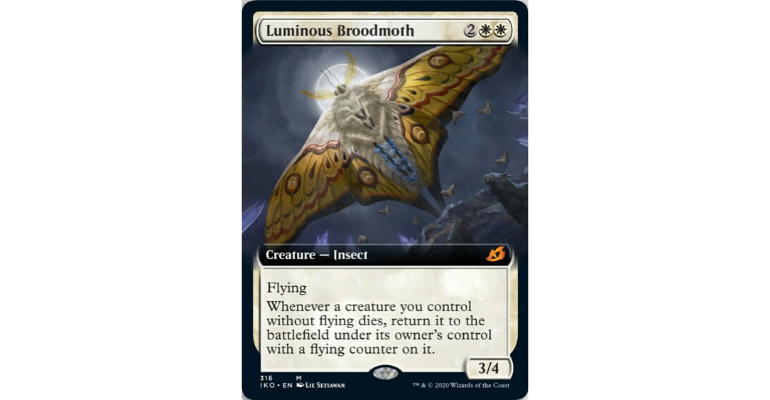 The next true bomb that you are going to want to see in your Azorius Flyers card pool is Luminous Broodmoth, a 3/4 flyer that can turn all your non-flying creatures into flyers after they die.

This card is completely busted and offers insane value in the limited format, as you can block with your ground based creatures, killing off your opponents attackers, while also adding new flyers to the battlefield.

It is one of the most powerful cards in the Ikoria: Lair of Behemoths set and fortunately for you, it fits perfectly into the Azorius Flyers archetype.

Grab this card quick if you see it, as others are sure to snap it up quickly if given the opportunity.

The Azorius Flyers archetype is a fan favourite of many Magic: The Gathering limited format players and fortunately for those of us who enjoy piloting this archetype, the Ikoria: Lair of Behemoths set delivers in spades.

There are other cards that you should keep an eye out for, such as Pacifism, which is one of the best cards in the Ikoria limited format. 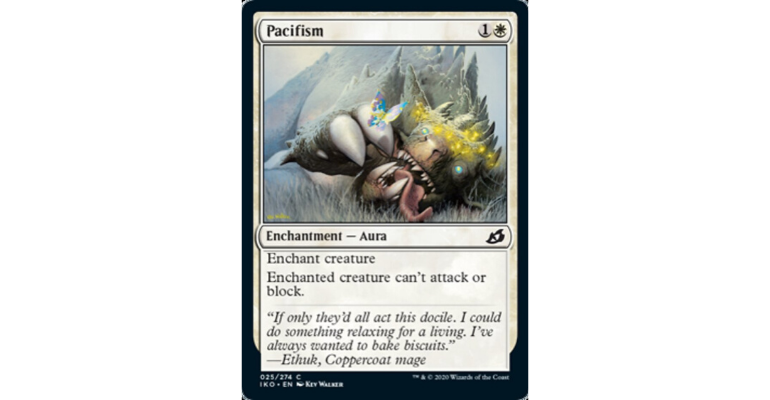 Additionally, any other removal / counter spells that help advance your board state is a great added bonus and should be highly sought after, after you have established your core set of cards.

Azorius Flyers is of course just one of the many archetypes available in the Ikoria: Lair of Behemoths limited format and we would love to hear which one you have had the opportunity to play / would like to see the most.