Just in time for the start of the 2022-23 NHL season, the 2022-23 Upper Deck Series 1 Young Guns checklist was released! Headlined by the top two picks of the 2021 NHL Entry Draft, 2022-23 Series 1 is going to be packed full of talented young rookies who hope to become the next NHL superstar.

Let’s go over some of our favourite rookies from the upcoming Young Guns crop and be sure to check out the full Young Guns checklist at the bottom of the post. 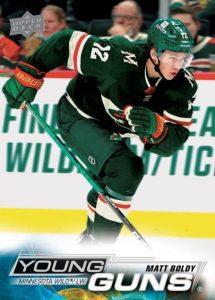 If Matt Boldy played the entire season last year, he likely would’ve won the Calder Memorial Trophy as the league’s top rookie. The 21-year-old forward is an elite offensive player and will likely be a star in the NHL with his high-end playmaking and shooting abilities.

Lukas Dostal has a good chance to be the best rookie goalie from 2022-23 Upper Deck Series 1. He has put up outstanding numbers at every level he has played at, including a .916 Save Percentage in 40 AHL games last year and is poised to be the successor to John Gibson in Anaheim. Of course, you can’t mention Lukas Dostal without mentioning the fact he scored a goal in a game that he made 50 saves in last year.

No 20-year-old has posted a higher points per game average than Jack Quinn’s 1.36 P/GP over the last 25 AHL seasons (minimum 20 games played). The talented forward possesses a great shot and projects to be a fixture in the Buffalo Sabres lineup for many years to come.

As the Montreal Canadiens are starting their rebuild, it’s worth keeping an eye on 22-year-old Jordan Harris. His complete 200 foot game has been impressive at every level he’s played at and his poise with the puck allows him to execute breakouts seamlessly. If he can keep improving his game, he’ll likely be a solid middle pairing defender.

Kent Johnson is a highlight reel machine in the making. The fifth overall pick in the 2021 NHL Entry Draft has the tools, creativity, and confidence to pull off jaw-dropping goals like when he pulled off the Michigan at the 2022 World Junior Hockey Championships.

Thomas Bordeleau has a chance to be a hidden gem in the 2022-23 Young Guns crop. The 5-foot-9 forward is an excellent playmaker who has consistently produced points at every level he’s played at. He will likely be a key component of the San Jose Sharks rebuild and shouldn’t be slept on.

The 22-year-old Swedish forward might not have as high of a ceiling as some of the other players in this Young Guns crop, but he has one of the best shots. His biggest challenge will be cracking an Los Angeles Kings lineup that is loaded with young, talented forwards.

As the first ever Seattle Kraken draft pick, Matty Beniers has a lot of high expectations to live up to. And, based on his first 10 games in the NHL, he’s likely to surpass them. Beniers is a dynamic talent who is an excellent two-way centre with strong offensive capabilities and has the potential to be a superstar at the NHL level. Given the hype and the performance, it’s very likely that Matty Beniers will be the top Young Gun to get from 2022-23 Upper Deck Series 1.

Despite being just 20 years old, the 6-foot-2 blueliner looked like an NHL veteran with his two-way play and crushing hits during his rookie season. Look for Braden Schneider to be a mainstay on the New York Rangers blue line for many years to come.

After some impressive seasons in Liiga (the top league in Finland), Matias Maccelli made the jump to North America and posted up 57 points in 47 games in the AHL as a 21-year-old. He’s put up points everywhere he has played and has a chance to earn a spot on a weaker Arizona Coyotes roster. If he can keep improving, he could as a solid middle-six forward at the NHL level.ers blue line for many years to come.

The 23-year-old centre got off to a hot start with his hometown team last season, scoring in his NHL debut in front of friends and family. While he projects to be more of a bottom 6 forward, McLaughlin will be a fan favourite for the Boston Bruins given his compete level and work ethic if he can crack the roster this season.

A highly-coveted college free agent, Ben Meyers could find himself a role as a bottom six forward for the Colorado Avalanche this season. He’s a strong defensive forward who has recently found a scoring touch over the past few seasons. He has the potential to work his way up the lineup for the defending Stanley Cup champions and could be a valuable piece as they look to repeat this upcoming season.

When you combine Pyotr Kochetkov’s on-ice success with his Ron Hextall-like demeanour, you end up with a player who could become one of the most beloved goalies in the NHL over the next few years. The fiery netminder endeared himself to the league after he went after Brad Marchand in the playoffs.

After leading the NCAA in scoring last season, Bobby Brink saw some moderate success at the NHL level and was one of the few bright spots for the Philadelphia Flyers last year. The 21-year-old winger has the potential to be a productive top six forward for the club once he returns from hip surgery in January 2023.

The first overall pick in the 2021 NHL Entry Draft had an incredible year last season. After putting up 32 points in 33 games in the NCAA, Owen Power made his NHL debut towards the end of last season and continued to impress with his two-way abilities. He has the potential to be one of the league’s best defensemen over the next decade, and will be highly sought after in 2022-23 Upper Deck Series 1.

The 20-year-old winger put up an impressive 57 points in 56 AHL games last season and has a very well-rounded game that should make Lukas Reichel a key player for the Chicago Blackhawks as they look to rebuild their team. WIth how weak Chicago’s forward group is, there’s a chance that Reichel will receive top line minutes as early as this season.

Jordan Spence crushed the competition at the AHL level last season. The 21-year-old blueliner put up 42 points in 46 games in his first season in the AHL and continued his success once he was called up to the Los Angeles Kings. He is an excellent puck mover and will likely be a top 4 defender at the NHL level.

After missing the majority of the 2020-21 hockey season due to a heart condition, Marco Rossi picked up where he left off and put up 53 points in 63 games in the AHL. Rossi is an incredibly talented forward who has put up points wherever he’s played thanks to his excellent hockey sense and puck skills. He’s capable of being a top six centre in the NHL and should push for a roster spot with the Wild this season.

While the first thing that you may notice about Mads Sogaard is his height, it’s his athleticism that has carried him to his success as a netminder in his career. At 6-foot-7, the Danish netminder is one of the tallest goaltender prospects in hockey and he has the potential to be a starting netminder if he can continue his trajectory.

Noah Cates may be the final Young Gun on the checklist but he’s arguably the last player you want to overlook. The 23-year-old winger had a relatively modest NCAA career and struggled to improve from an impressive sophomore season. However, everything seemed to click for him once he hit the ice for the Philadelphia Flyers, scoring 9 points in 16 games while posting solid underlying numbers that show it might not just be a fluke. He’ll still have to earn his spot on the roster this year but if he can keep up his play from the end of last season, that won’t be an issue.

2022-23 Upper Deck Series 1 is projected to be released in November. Because there is no official release day just yet, be sure to follow us on Instagram to catch our release day alert when it’s announced.

Check out the full 2022-23 Upper Deck Series 1 Young Guns checklist below and let us know which ones you are hoping to add to your collection when it releases!